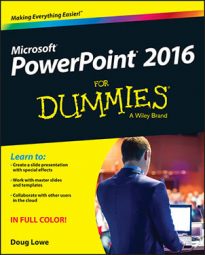 If you've never attempted to add a chart to a slide in PowerPoint 2016, the process can be a little confusing. A chart is simply a series of numbers rendered as a graph. You can supply the numbers yourself, or you can copy them from a separate file, such as an Excel spreadsheet.

You can create all kinds of different charts, ranging from simple bar charts and pie charts to exotic doughnut charts and radar charts. Very cool, but a little confusing to the uninitiated.

The following list details some of the jargon that you have to contend with when you're working with charts:

The most interesting thing to know about charting in PowerPoint 2016 is that it is closely integrated with Excel 2016. When you insert a chart in PowerPoint, Excel is automatically started, and the data that you chart is placed in an Excel workbook. However, that Excel workbook isn't stored as a separate document. Instead, the chart and the datasheet workbook are stored within the PowerPoint document.

Doug Lowe is a veteran author with more than 40 For Dummies books to his credit, including titles on everything from Microsoft Office productivity with PowerPoint to networking to programming in ASP.NET.