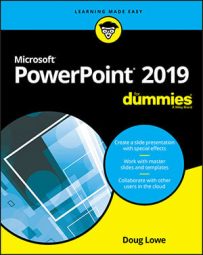 Explore Book Buy On Amazon
In Microsoft PowerPoint 2019, you can control several important aspects of how an audio file is played by selecting the file to reveal the Audio Tools contextual tab on the Ribbon and then opening the Playback tab, shown here. As you can see, this tab contains several controls that let you edit the way the sound file is played.

Control when a sound is played

By default, sounds are not played until you click the sound icon that appears on the slide. If you want a sound to play automatically when the slide is displayed, change the option in the Start drop-down list (found in the Audio Options group on the Audio Tools Playback tab) from On Click to Automatically.

If you select On Click or Automatically, the sound automatically stops when you move to the next slide. To allow the sound to continue over several slides, select the Play Across Slides option from the Start drop-down list.

If the sound file isn’t long enough, you can loop it so that it plays over and over again. This feature is most useful when you have a subtle sound effect, such as the sound of waves crashing, that you want to continue for as long as you leave the slide visible. To loop an audio clip, just select the Loop Until Stopped check box found in the Audio Options group.

By default, the icon representing an audio clip is visible on the slide during your slide show. Assuming that you have set the sound to play automatically, you probably don’t want the icon visible.

Fade the sound in and out

The Fade In and Fade Out controls let you gradually fade your audio clip in and out. By default, these controls are both set to 0, so the audio clip begins and ends at full volume. By changing either or both of these controls to a value such as 2 or 3 seconds, you can smoothly fade the sound in or out for a more subtle effect.

Doug Lowe is a master at demystifying technology. The 50+ technology books he's written include more than 30 For Dummies books, including Networking All-in-One For Dummies. Doug has been managing networks at publishing companies and nonprofit organizations for more than 20 years and is presently IT director for a civil engineering firm.