How to Remove Picture Backgrounds in PowerPoint 2019

Explore Book Buy On Amazon
Microsoft PowerPoint 2019 provides a bit of picture editing wizardry in the capability to remove the background from a picture. For example, the following image shows a picture of my dog Lucy with the background removed. (Background removal works best with picture that have a clear high-contrast distinction between the picture’s subject and the background.) 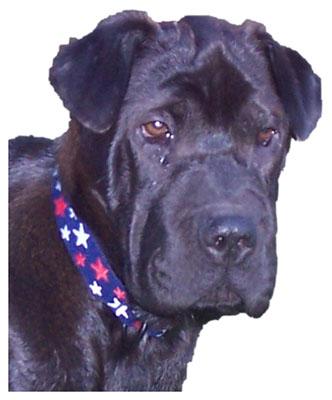 Lucy with the background removed.

To accomplish this bit of photo-editing magic, follow these steps:

1. Select the picture whose background you want to remove.

2. On the Picture Tools → Format tab, click the Remove Background button (found in the Adjust group).

This figure shows PowerPoint’s initial attempt at removing the background from the picture of Lucy. As you can see, PowerPoint has found most of Lucy’s head but managed to cut off the top of her head, her nose, and her right eye. The result is a little disconcerting. 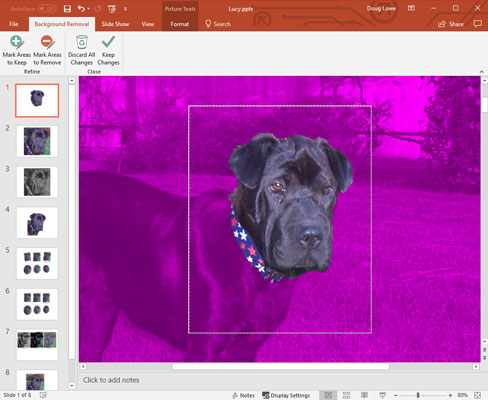 3. If necessary, resize the bounding rectangle to properly enclose the subject.

This figure shows the results after I resized the bounding rectangle to include all of Lucy’s head. 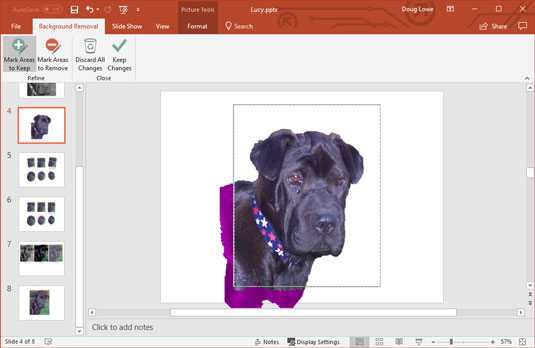 Background removal after fiddling with the bounding rectangle and marking areas to keep and remove.

For example, if an area that’s part of the subject is shown as background, click the Mark Areas to Keep button. Then, either click in the area you want included or click and drag a line across a large portion of the area to be included. PowerPoint will attempt to discern which part of the picture you marked and include that area in the picture’s subject. Note that you don’t have to circle the area you want to include, nor do you have to be too precise. PowerPoint will do its best to figure out which portions of the image to include based on your mark.

Similarly, if PowerPoint has mistaken part of the background for the subject, click the Mark Areas to Remove button and click or draw a line within the area that should be removed.

If PowerPoint misinterprets your mark, press Ctrl+Z to undo your action. Or, click the Delete Mark button and then click the mark you want to delete.

The slide returns to normal, with the background of your picture removed.

Doug Lowe is a master at demystifying technology. The 50+ technology books he's written include more than 30 For Dummies books, including Networking All-in-One For Dummies. Doug has been managing networks at publishing companies and nonprofit organizations for more than 20 years and is presently IT director for a civil engineering firm.