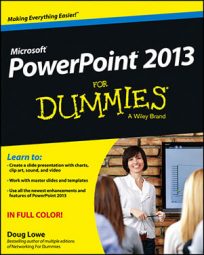 For starters, you can apply custom animations to any object on a slide, whether it’s a text placeholder, a drawing object such as an AutoShape or a text box, or a clip art picture. For text objects, you can apply the animation to the text object as a whole or to individual paragraphs within the object.

You can also specify whether the effect goes all at once, word by word, or letter by letter. And you can indicate whether the effect happens automatically or whether PowerPoint waits for you to click the mouse or press Enter to initiate the animation.

You can create more than one animation for a given object. For example, you can give an object an entrance effect, an emphasis effect, and an exit effect. That lets you bring the object onscreen, draw attention to it, and then have it leave.

If you want, you can have several emphasis or motion path effects for a single object. You can also have more than one entrance and exit effect, but in most cases, one will do.

If you want, you can create a trigger that causes an animation effect to operate when you click an object on the slide. For example, you might create a trigger so that all the text in a text placeholder pulsates in when you click the slide title. To do so, first add the animation effect to the text. Then, click Trigger in the Advanced Animation group and choose On Click Of.

A list of all objects on the slide that can be clicked is displayed; select the Title placeholder. (You can also trigger an animation when a specific location is reached during playback of a video file.)