How to Create a Photo Album in PowerPoint 2016 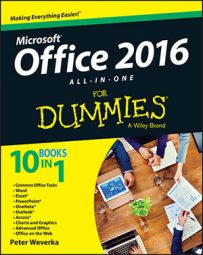 Photo album is just PowerPoint 2016's term for inserting many photographs into a presentation all at once. You don't necessarily have to stuff the photo album with travel or baby pictures for it to be a proper photo album.

The Photo Album is a wonderful feature because you can use it to dump a bunch of photos in a PowerPoint presentation without having to create slides one at a time, insert the photos, and endure the rest of the rigmarole. Create a photo album to quickly place a bunch of photos on PowerPoint slides.

PowerPoint creates a new presentation for you when you create a photo album. To start, take note of where on your computer the photos you want for the album are. Then go to the Insert tab and click the Photo Album button. You see the Photo Album dialog box, as shown here. For such a little thing, the Photo Album dialog box offers many opportunities for constructing a PowerPoint presentation. Your first task is to decide which pictures you want for your album. Then you choose a slide layout for the pictures. 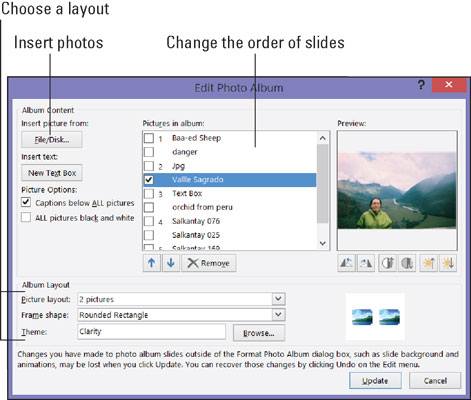 Create a photo album in this dialog box.

Here is the lowdown on choosing pictures for a photo album:

Choosing a layout for slides

Your next task is to go to the bottom of the Photo Album dialog box and choose a layout for the slides in the presentation. Open the Picture Layout drop-down list to choose one of the seven picture layouts:

Changing the look of pictures

The Photo Album dialog box offers a handful of tools for changing the look of the pictures. When you use these tools, keep your eye on the Preview box — it shows you what you're doing to your picture.

At last, click the Create button when you're ready to create the photo album. PowerPoint attaches a title slide to the start of the album that says, Photo Album with your name below.

Putting on the final touches

Depending on the options you chose for your photo album, it needs all or some of these final touches:

Peter Weverka is a veteran For Dummies author. In addition to previous books on Microsoft Office, Peter has written guides to Windows, the Internet, and Quicken.