How to Use Goal Seeking in Your Excel Financial Model

By: Danielle Stein Fairhurst and
Updated: 09-08-2017
From The Book: Financial Modeling in Excel For Dummies

Explore Book Buy On Amazon
One tool that’s very useful for financial modeling is goal seek. If you know the answer you want, but you want to know what input you need to achieve it, you can work backward using a goal seek.

In order to run a goal seek, you must have

It doesn’t matter how complicated the model is. As long as there is a direct link between the formula and the input cell, the goal seek will calculate the result correctly.

What a goal seek is and how it works is best demonstrated using a simple model. For a practical example of how to use a goal seek to limit project costings, follow this series of steps as shown. 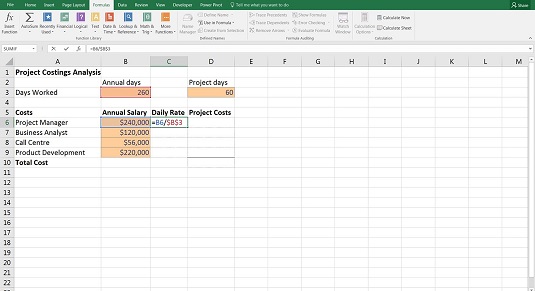 As shown below, you can use simple formulas to calculate the total cost of a project based on the number of days worked, giving a total costing of $146,769. Unfortunately, however, this modeler only budgeted for $130,000 in staff costs. If you want the project to come in under budget, you need to know how much you need to cut the days worked by. You can manually tweak the number of days that has been input in cell D3, but it would take a long time to get the number exactly right. By using a goal seek, you can do it in seconds:

The number of project days in cell D3 automatically changes to 53.1446540880503, which is a lot more information than you probably need! Round it down manually, by typing 53 into cell D3, which will change the total costings so that they come just under the $130,000 target you needed. 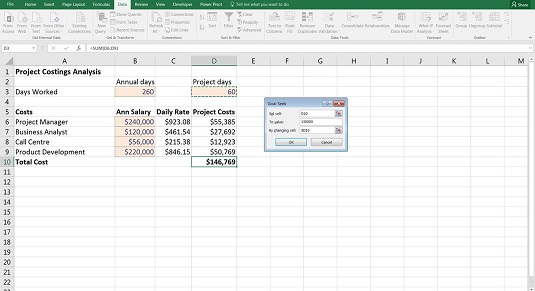 Because a goal seek is essentially pasting the number into the cell, it circumvents the data validation rule, as though you had copied and pasted the value.

Calculating a break-even point with a goal seek

For a practical example of how to use a goal seek to calculate a break-even point. Follow these steps:

The number of units in cell A3 on the Assumptions page automatically changes to 6,424, which is the break-even point. 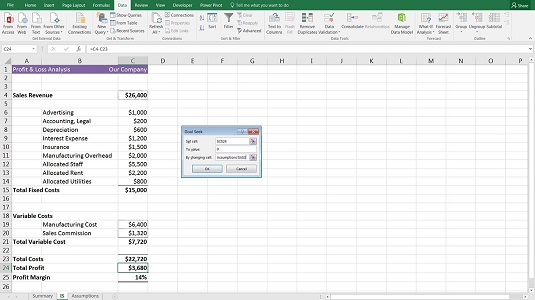 Using a goal seek to calculate a break-even point.