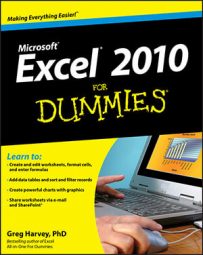 Excel 2010 offers a wide variety of keystrokes for moving the cell cursor to a new cell. When you use one of these keystrokes, the program automatically scrolls a new part of the worksheet into view, if this is required to move the cell pointer.

The following table summarizes these keystrokes, including how far each one moves the cell pointer from its starting position.

When moving the cell cursor by using the keystrokes listed in the table, keep the following helpful hints in mind: