How to Use the Database Functions in Excel 2013

Excel 2013 includes a number of database functions that you can use to calculate statistics, such as the total, average, maximum, minimum, and count in a particular field of the data list only when the criteria that you specify are met.

The database functions, regardless of the difference in names (and they all begin with the letter D) and the computations that they perform, all take the same three arguments as illustrated by the DAVERAGE function:

The arguments for the database functions require the following information:

If you mistakenly specify a column with text entries as the field argument for these database functions, Excel returns an error value or 0 as the result. The table lists the various database functions available in Excel along with an explanation of what each one calculates. (You already know what arguments each one takes.)

Cell C2 in the worksheet shown in this figure contains the following formula: 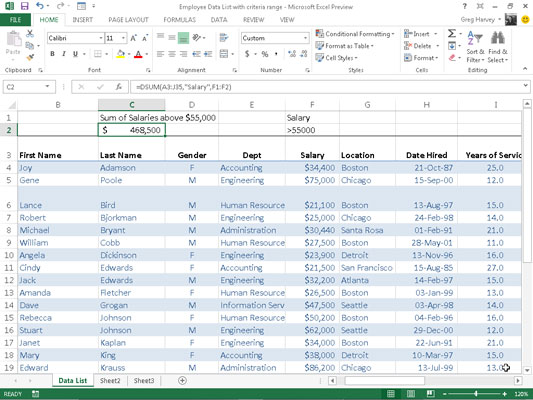 This DSUM function computes the total of all the salaries in the data list that are above $55,000. This total is $468,500, as shown in cell C2, which contains the formula.

To perform this calculation, specify the range A3:J35, which contains the entire data list. This range includes the top row of field names as the database argument (which Excel 2013 automatically converted to its range name equivalent, Table2[#All]).

Then specify "Salary" as the field argument of the DSUM function because this is the name of the field that contains the values that you want totaled. Finally, specify the range E1:E2 as the criteria argument of the DSUM function because these two cells contain the criteria range that designate that only the values exceeding 55000 in the Salary field are to be summed.