How to Use Depreciation Functions in Excel 2016

The figure contains a Depreciation table that uses all four depreciation methods to calculate the depreciation of office furniture originally costing $50,000 to be depreciated over a 10-year period, assuming a salvage value of $1,000 at the end of this depreciation period. 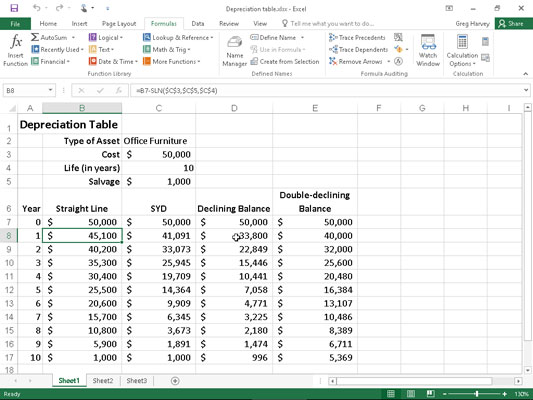 The Formula bar here shows the SLN formula entered into cell B8:

This formula subtracts the amount of straight-line depreciation to be taken in the first year of service from the original cost of $50,000. (This value is brought forward from cell C3 by the formula =C3.) After creating this original formula in cell B8, the Fill handle was used to copy it down to cell B17, which contains the final salvage value of the asset in the 10th year of service.

Cell C8 contains a similar formula for calculating the sum-of-years-digits depreciation for the office furniture. This cell contains the following formula:

This formula subtracts the amount of sum-of-years-digits depreciation to be taken at the end of the first year from the original cost of $50,000 in cell C7 (also brought forward from cell C3 by the formula =C3). After creating this original formula in cell C8, the Fill handle was again used to copy it down to cell C17, which also contains the final salvage value of the asset in the 10th year of service.

The same basic procedure was used to create the formulas using the DB and DDB depreciation methods in the cell ranges D8:D17 and E8:E17, respectively. Cell D8 contains the following DB formula:

Note that, like the SYD function, both of these depreciation functions require the use of a period argument, which is supplied by the list of years in the cell range A8:A17. Note also that the value in cell C4, which supplies the life argument to the SYD, DB, and DDB functions, matches the year units used in this cell range.