How to Insert a Function in Excel 2016

Although you can enter a function by typing it directly in a cell, Excel 2016 provides an Insert Function command button on the Formula bar you can use to select any of Excel's functions. When you select this button, Excel opens the Insert Function dialog box (shown in the figure) where you can select the function you want to use. 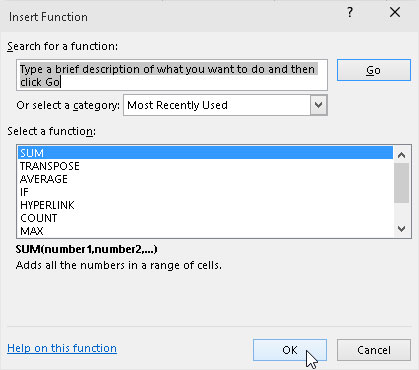 Select the function you want to use in the Insert Function dialog box.

If your function isn't among the most recently used, you must then select the appropriate category of your function in the Select a Category drop-down list box. If you don't know the category, you must search for the function by typing a description of its purpose in the Search for a Function text box and then press Enter or click the Go button.

For example, to locate all the Excel functions that total values, you enter total in the Search for a Function list box and click the Go button. Excel then displays its list of recommended functions for calculating totals in the Select a Function list box. You can peruse the recommended functions by selecting each one. While you select each function in this list, the Insert Function dialog box shows you the required arguments followed by a description, at the bottom of the dialog box, of what the function does.

After you locate and select the function that you want to use, click the OK button to insert the function into the current cell and open the Function Arguments dialog box. This dialog box displays the required arguments for the function along with any that are optional. For example, suppose that you select the SUM function (the crown jewel of the Most Recently Used function category) in the Select a Function list box and then select OK. As soon as you do, the program inserts

in the current cell and on the Formula bar (following the equal sign), and the Function Arguments dialog box showing the SUM arguments appears on the screen (as shown here). This is where you add the arguments for the SUM function. 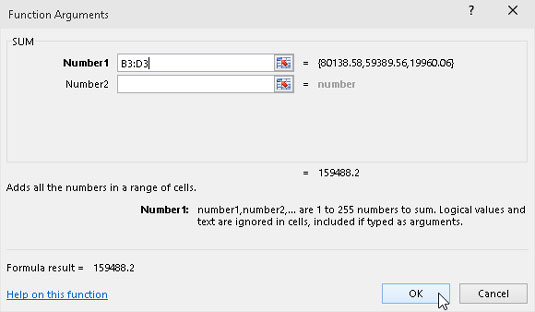 Specify the arguments to use in the selected function in the Function Arguments dialog box.

As shown, you can sum up to 255 numbers in the Function Arguments dialog box. What's not obvious, however (there's always some trick, huh?), is that these numbers don't have to be in single cells. In fact, most of the time you'll be selecting a whole slew of numbers in nearby cells (in a multiple cell selection — that range thing) that you want to total.

To select your first number argument in the dialog box, you select the cell (or block of cells) in the worksheet while the insertion point is in the Number1 text box. Excel then displays the cell address (or range address) in the Number1 text box while, at the same time, showing the value in the cell (or values, if you select a bunch of cells) in the box to the right. Excel displays the total near the bottom of the Function Arguments dialog box after the words Formula result=.

If you're adding more than one cell (or a bunch of cells) in a worksheet, press the Tab key or click the Number2 text box to move the insertion point to that text box. (Excel responds by extending the argument list with a Number3 text box.) Here is where you specify the second cell (or cell range) to add to the one now showing in the Number1 text box. After you select the cell or second cell range, the program displays the cell address(es), the numbers in the cell(s) to the right, and the running total near the bottom of the Function Arguments dialog box after Formula result= (as shown).

You can minimize the entire Function Arguments dialog box down to just the contents of the argument text box you're dealing with (Number2, Number3, and so on) by clicking its particular Minimize Dialog Box button if the dialog box obscures the cells that you need to select.

When you finish pointing out the cells or bunch of cells to sum, click the OK button to close the Function Arguments dialog box and put the SUM function in the current cell.