Panes are great for viewing different parts of the same Excel 2016 worksheet that normally can't be seen together. You can also use panes to freeze headings in the top rows and first columns so that the headings stay in view at all times, no matter how you scroll through the worksheet.

Frozen headings are especially helpful when you work with a table that contains information that extends beyond the rows and columns shown onscreen.

In the following figure, you can see just such a table. The Income Analysis worksheet contains more rows and columns than you can see at one time (unless you decrease the magnification to about 40% with Zoom, which makes the data too small to read). In fact, this worksheet continues down to row 52 and over to column P. 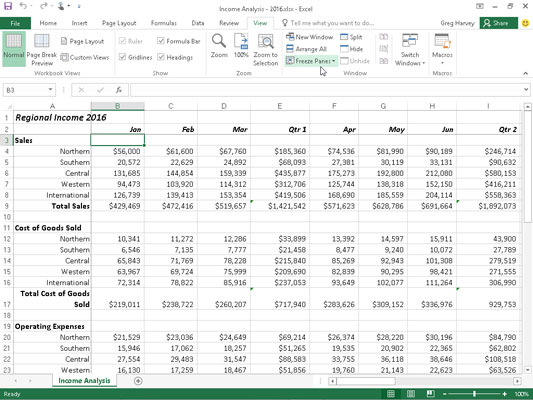 Frozen panes keep the column headings and the row headings on the screen at all times.

Refer to the figure to see the worksheet right after splitting the window into four panes and freezing them. To create and freeze these panes, follow these steps:

When Excel sets up the frozen panes, the borders of frozen panes are represented by a single line rather than the thin gray bar, as is the case when simply splitting the worksheet into panes. 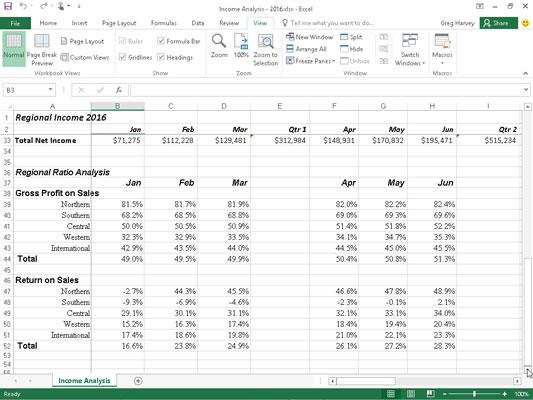 The Income Analysis worksheet after scrolling the rows up to display additional income and expense data.

Look to the following figure to see what happens when you scroll the worksheet to the right. In this figure, I the worksheet is scrolled right so that the data in columns M through P appear after the data in column A. Because the first column is frozen, it remains onscreen, helping you identify the various categories of income and expenses for each month. 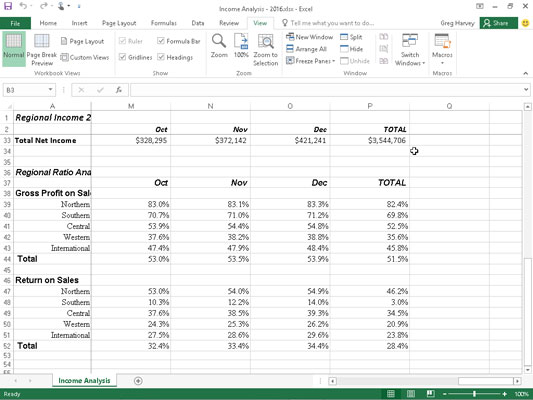 The Income Analysis worksheet after scrolling the columns left to display the last group of columns in this table.