How to Calculate the Present Value in Excel 2013

The PV (Present Value) function in Excel 2013 is found on the Financial button’s drop-down menu on the Ribbon’s Formulas tab (Alt+MI). The PV function returns the present value of an investment, which is the total amount that a series of future payments is worth presently.

The syntax of the PV function is as follows:

The fv and type arguments are optional arguments in the function (indicated by the square brackets). The fv argument is the future value or cash balance that you want to have after making your last payment. If you omit the fv argument, Excel assumes a future value of zero (0).

The figure contains several examples using the PV function. All three PV functions use the same annual percentage rate of 1.25 percent and term of 10 years. Because payments are made monthly, each function converts these annual figures into monthly ones. 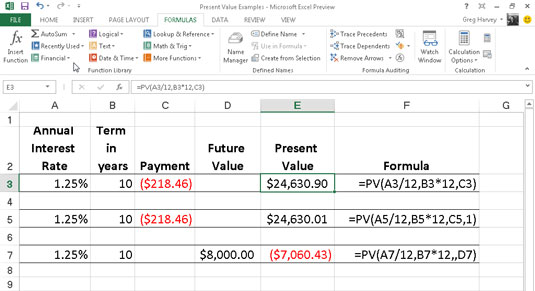 Note that although the PV functions in cells E3 and E5 use the rate, nper, and pmt ($218.46) arguments, their results are slightly different.

The third example in cell E7 uses the PV function with an fv argument instead of the pmt argument. In this example, the PV function states that you would have to make monthly payments of $7,060.43 for a 10-year period to realize a cash balance of $8,000, assuming that the investment returned a constant annual interest rate of 1 1/4 percent.