Counting Cells in Excel 2010 with COUNT, COUNTA, and COUNTBLANK

Excel 2010 offers an assortment of counting functions — including COUNT, COUNTA, COUNTBLANK — in the Statistical category that enable you to count the number of cells that contain numeric values, that are nonblank (and thus contain entries of any kind), or whose values meet the criteria that you specify. You can find these functions on the Statistical continuation menu accessed from the More Functions button's drop-down menu on the Formulas tab.

The following figure illustrates the different types of counting formulas that you can build to return such basic statistics as the total number of cells in a particular range, the number of occupied cells in that range, and the number of numeric and text entries in the occupied range. In this worksheet, the cell range A1:C8 has been assigned the name sales_data. 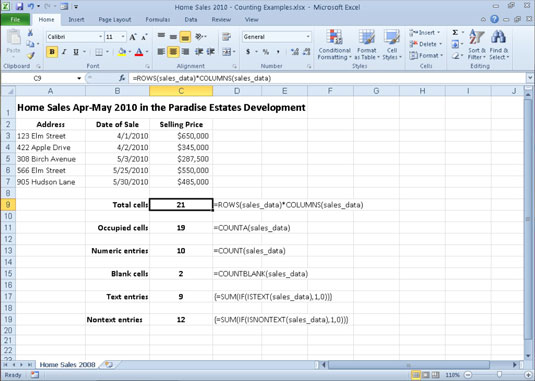 The most basic formula is the one that returns the total number of cells in the sales_data range. To build this formula in cell C9, use the ROWS and COLUMNS information functions to return the number of rows and columns in the range, and then create the following formula that multiplies these two values together:

The value arguments (all of which are optional except for value1) include up to 30 different values or cell ranges that you want counted. In the example shown in the figure, cell C11 contains the following COUNTA function:

The next formula in the sample worksheet calculates the number of numeric entries in the cell range sales_data. To do this, you use the COUNT function. The COUNT function takes the same arguments as COUNTA, the only difference being that COUNT counts a value or cell specified in its value arguments only if it contains a numeric entry.