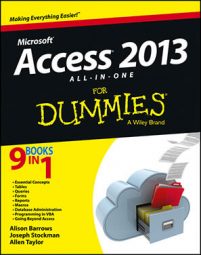 Access 2013 is a great database application on its own, but it also plays well with others, allowing you to display and retrieve data from several other programs. If a program supports Visual Basic for Applications (VBA), you can control it from Access. Here’s a brief list of applications that you can take control of and share data with:

Alison Barrows is the author or coauthor of several books about Access, Windows, and the Internet. Joseph Stockman is an 18-year software designer who has authored or coauthored five Access programming books. Allen Taylor is a 30-year veteran of the computer industry and the author of over 20 books.