Explore Book Buy On Amazon
When you open a Microsoft Access database — be it an existing one or one you’re just starting from a blank database or a template — the workspace changes, offering the Ribbon and its tabs shown here (Home, Create, External Data, and Database Tools). These tabs are not to be confused with the context-sensitive tabs that appear when various database objects (the tables, forms, queries, or reports that make up your database) are created or edited.

The main Ribbon tabs appear when you open a database.

When the Ribbon tabs first appear, many of their buttons are dimmed — because they don’t become available until you’re doing something that warrants their use. For example, if you haven’t opened any tables, forms, reports, or queries in your open database, the tools for editing or formatting your database will appear on the tabs, but they’ll be dimmed, which indicates that they’re unavailable. Tools for creating new components are available on the Create tab, but anything that works with existing data will be dimmed.

After you open a table, report, query, or form, the tools for that object become available. Displaying a form in Layout view, for example, adds the Form Layout Tools group of tabs to the main set of five tabs, as shown.

The buttons relevant to what’s open and active in your database are available when you need them.

To move from one tab on the Ribbon to another, simply click the tab’s name. It’s easy to see which tab is currently open — as shown here, the Create tab stands out from all the other tabs, and you can see all its buttons. When you mouse over another tab, that tab brightens, too, but you don’t see its buttons until or unless you click the tab.

You can easily tell the active tab (Create) from the inactive ones.

After you’ve created an object — say a table, by clicking Table on the Create tab — the Home tab is displayed, and a new label (Table Tools) appears above the context-sensitive Fields and Table tabs. See? Access knows what you need based on whatever you’ve just done within the application.

Drop-down list buttons are accompanied by a small, down-pointing triangle, appearing to the button’s right. When you click the triangle, a list of options appears, as shown.

Click the triangle to the right of the button and make a choice.

If you’re fresh from using a pre-2007 version of Office (XP and previous), you’ll be relieved to see a File tab. Office 2007 users lost that familiar word in that version’s interface, replaced then by an Office button, with no comforting word File on it. The word File came back in 2010, however, displaying Backstage view, for opening files, saving files, starting new files, printing, and customizing Access through the Options command. The File tab remains in Access 2019, and is shown here. 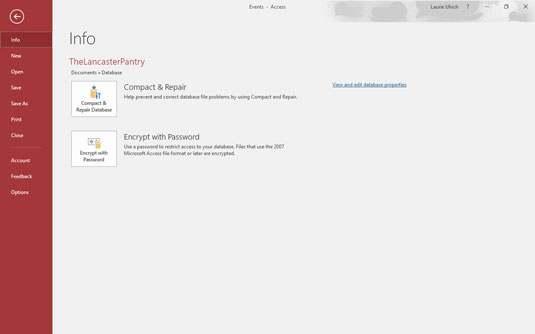 Craving the File menu’s tools? Click the File tab to choose from a series of commands on the left.

When you’re in a database and click the File tab, you’re taken to the Info display, showing information about the open database.

Depending on what’s going on within the workspace — that is, what you’ve just done as you edit your table, report, query, or form, or which button you’ve clicked on one of the Ribbon tabs — Access offers relevant onscreen tools and panels. As an example of this context-sensitive feature, if you open a table and click the Report button on the Create tab (see the Reports section of the Create tab), not only does a report appear, but you also get new tabs — Design (shown here), Arrange, Format, and Page Setup, under the heading “Report Layout Tools”.

As you work with Access, you’ll get a feel for what’s going to appear when you do certain things. Things appear and disappear as you work because Access offers you just what you need for the task you’re performing or feature you’re using.

Laurie Ann Ulrich has trained more than 20,000 people to make better, more creative use of their computers. She has created online courses and written more than 30 books.

Ken Cook built and manages a computer consulting business that has helped users for over 20 years. He's an expert at creating Microsoft Office and Access database solutions and teaches online Access courses.