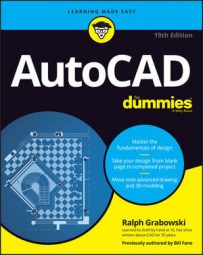 Explore Book Buy On Amazon
Many modification techniques and AutoCAD commands that you use in 2D drafting can be applied to 3D modeling. In addition, a specialized set of 3D editing commands is available in AutoCAD. All these AutoCAD commands are in the Modify panel on the Home tab when the 3D Modeling workspace is current.

Three-dimensional objects themselves are complex objects that can be made up of several hundred, or perhaps even thousands, of objects. Although these objects never stray from their parents, you can access them individually or in groups via subobject selection: selecting a vertex, an edge, or a face of a 3D object. After you select a subobject, you can use grip editing and the 3D gizmos to manipulate it.

To more easily select subobjects, you can enable subobject filtering from the Ribbon. Vertex, edge, and face filters are located on the Subobject Selection Filter split button in the Selection panel on the Home and Solid tabs.

The CULLINGOBJ and CULLINGOBJSELECTION system variables help limit object selection to the faces that are visible in the current view by ignoring faces around the back of the objects being viewed. By default, both these variables are turned off, so you can select objects in front and behind. If you have a complex model, turn on culling by clicking Culling in the Selection panel on the Home tab. To turn off culling, click the Culling button again. The button is shaded blue when the feature is enabled.

If you need to select only a face on a 3D object, press and hold the Ctrl key and select the face you want to select. This method can be faster than turning subobject filters on and off.

Working with gizmos in AutoCAD

Although you can use the Move, ROtate, and SCale commands to modify 3D objects, they can sometimes give unexpected results in 3D. Enter the 3DMOVE, 3DROTATE, and 3DSCALE commands, which all use a gizmo or grip tool when a non-orthographic view is current.

A gizmo restricts or constrains movement along the X,Y plane and the Z-axis. To use a gizmo, click an axis on the tool to restrict movement to that axis. You can access the three gizmos by using these methods:

You can also access the Move, Rotate, and Scale gizmos in 3D by selecting objects when no command is active. You can set the default gizmo that is displayed when you use grips in 3D by opening the Gizmo drop-down menu in the Selection panel on the Home tab and selecting the gizmo that you want to be active. Right-clicking a gizmo lets you switch between different gizmos and constraints.

Moving, rotating, and scaling objects are certainly the Big Three operations of 3D editing, but a number of other 3D variations on 2D editing commands are hiding in the wings, awaiting their turns in the spotlight.

Getting your 3D AutoCAD ducks in a row

Making objects align with each other in 3D can be a challenge at times, especially if you need to not only move an object in 3D but also rotate and scale it based on the specified alignment. AutoCAD has two commands you can use to align objects:

Holding up a mirror

Associative arrays work in 3D as well as in 2D. AutoCAD has long had the 3DARRAY command; it’s similar to the old-style ARray command in that it doesn’t create an associative array object. For information on creating rectangular, polar, and path array objects, refer to the online Help system.

You can edit 3D solids in a variety of different ways that you can’t edit other objects. You can use grip editing to change the shape of 3D solids, or use Boolean operations on a 3D solid to create complex models. You can fillet and chamfer the edges of a 3D solid by using the FILLETEDGE and CHAMFEREDGE commands.

Grip-editing is one of the most direct ways to modify an object. To edit a 3D solid by using grips, select the 3D solid when no command is running, and then select the grip that you want to use to edit the solid. Pay close attention to the grip you select; some grips give you control over changing the overall size of a solid; others might change only part of a solid, such as the face or top radius of a cone. 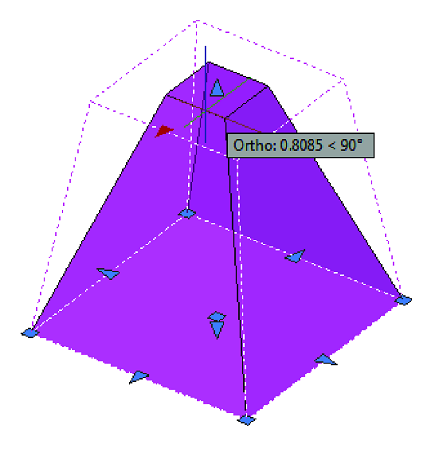 You can join 3D solids by using the UNIon command to create a new 3D solid. You can also subtract volume from a 3D solid by using another, intersecting 3D solid to determine what should be removed with the SUbtract command. The INtersect command can be used to calculate a new 3D solid based on the volume that is common to two or more intersecting 3D solids.

See the image below for examples. You can find these three commands in the Boolean panel on the Solid tab.

Solid primitives on the left, and the result of using the UNIon, SUbtract, and INtersect commands.

Boolean operations are probably the most-used of the 3D commands. Yes, primitive solids such as a box or a wedge are easy to use, but most real-world 3D objects are more complex than the simple primitives. Something as apparently simple as a connecting rod on a car engine might require a dozen or so Boolean operations to add and subtract simpler solids until you arrive at the final design.

You will often need to change to a different user coordinate system (UCS) before placing the next subobject to be combined with the base object. The easiest way to do this is to turn on UCSDETECT (F6) on the status bar. Then, as you move the cursor around while a create command is active, AutoCAD will automatically snap the UCS to any planar surface that it passes over.

Because fillets and chamfers are common real-world features, it’s logical that tools for creating them are available. You can fillet or bevel the edges of a 3D solid by clicking the Fillet Edge (or Chamfer Edge) split button in the Solid Editing panel on the Solid tab.

Both commands allow you to select multiple edges to fillet or bevel. When you select an edge, AutoCAD gives you feedback on how the selected edge will be affected. The following image shows an L-shaped 3D solid that has been filleted and chamfered.

Before and after filleting and chamfering a 3D solid.

To remove a fillet or chamfer, start the Erase command. Then, at the Select Objects prompt, hold down the Ctrl key and select the fillet or chamfer to be removed. For fillets, you may need to also remove nearby filleted corners that might have been created during the application of the fillet.

The FILLETEDGE and CHAMFEREDGE commands were new in AutoCAD 2011. You can still use the Fillet and CHAmfer commands on 3D solids, but the new commands are much more efficient.

The SLice command lets you cut a 3D solid along a plane. You can slice a 3D solid by using a planar curve, such as a circle, 2D polyline, or surface, among many others. When you slice a 3D solid, you can choose which part of the 3D solid is retained, or you can keep both. This image shows a solid model that has been sliced in half. 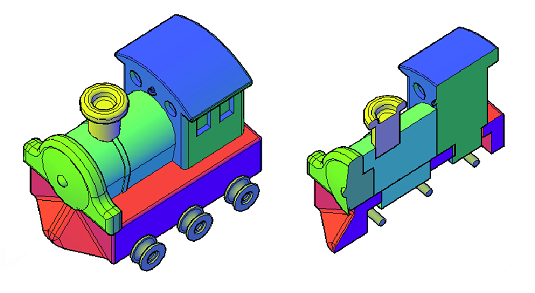 Carving up a solid model with the SLice command.

To start the SLice command, choose Slice from the Solid Editing panel on the Solid tab. After the command is started, specify a 3D solid to slice, an axis or object to define the cutting plane, and then, finally, which new 3D solids to keep.

Use this guide to uncover more AutoCAD secrets.

Ralph Grabowski is editor of upFront.eZine, a weekly e-newsletter that reports on the business of computer-aided design. He is the author of more than 240 books and e-books on CAD and other topics, and his renowned WorldCAD Access industry blog is widely respected in the industry.