How to Change Blender Views with the Numeric Keypad

The View menu is certainly helpful, even in its pie form, but you can change your view in an even faster way: the numeric keypad. Each button on your keyboard's numeric keypad has an extremely fast way of changing your viewing angle in the 3D View. The figure is an image of the numeric keypad with an indication of what each key does. 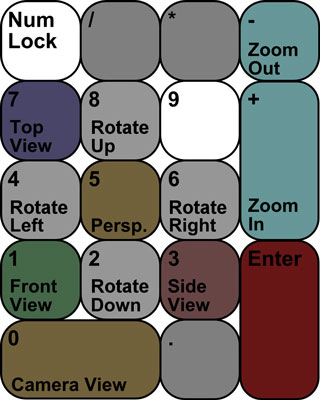 The numeric keypad is your ultimate tool for navigating 3D space.

If the image doesn't quite work for you as a reference, the table shows what each key does in a table-based format.

In the image, notice that the hotkeys are arranged in a way that corresponds with how you would expect them to be. Top view is at the top of the keypad at Numpad 7. The front view is accessed at Numpad 1, and if you move to the right on the keypad, you can see the right side view by pressing Numpad 3.

Because it's the view you render from, the active camera is the most important and therefore gets the largest key at Numpad 0. Pressing Numpad 5 is a quick way to toggle between orthographic and perspective views. If you have View Name turned on in the Interface section of User Preferences, it actively informs you about which view you're using. And having the very cool Smooth View option enabled definitely helps you keep from getting disoriented while working.

The notions of what is left and right in the 3D View are relative to you, not the object or scene you're working in. That is, if you model a character who's facing you from the front view, pressing Numpad 3 (right side view) shows your character's left side. This setup can be a bit confusing in writing or conversation, but while you're working, it's really not much of an issue.

Now, maybe you got a little bit excited and hit Ctrl+Numpad 0 to see what the opposite of the camera view is and had some unexpected results. Ctrl+Numpad 0 does something entirely different than pressing Ctrl in combination the other Numpad numbers. The Ctrl+Numpad 0 hotkey actually allows you to treat any selectable object in Blender as a camera, with the view looking down the object's local Z-axis.

You can also access this functionality from the View menu at View→Cameras→Set Active Object as Camera. The ability to treat any object as a camera may seem like a strange feature to have, but it can be really helpful for doing things like aiming lights and checking the line of sight of an object or a character.

Another cool thing you can do with Numpad 0 is to quickly snap the camera to your user view. For example, say that you've been working on 3D model for a while from a certain angle, and you want to see what the model looks like in a render from that specific angle. Rather than try to grab and rotate your camera to get close to this same angle, you can simply press Ctrl+Alt+Numpad 0 or choose View→Align View→Align Active Camera to View, and the camera jumps directly to where you're viewing your model.

The numeric keypad also gives you the ability to navigate your scene like you might normally do with your mouse. You use the 8, 4, 6, and 2 keys on the numeric keypad. Numpad 8 and Numpad 2 orbit the view towards and away, respectively, whereas Numpad 4 and Numpad 6 orbit it left and right. By default, Blender does these rotations in 15-degree increments, but you adjust this amount to be more fine or coarse in User Preferences under Interface with the value labeled Rotation Angle.

Orbiting with the Numpad is a nice way to get a quick turntable view of a scene, particularly if you have your View rotation set to Trackball in User Preferences. You can also pan the view by pressing Ctrl in combination with any of these buttons. For example, Ctrl+Numpad 4 and Ctrl+Numpad 6 pan the view left and right. You can even zoom the view by using the Numpad Plus (+) and Numpad Minus (–) keys.

Two more useful hotkeys are on the numeric keypad: Numpad Slash (/) and Numpad Dot (.). These keys are somewhat more esoteric than the other keys, but they definitely come in handy.

Pressing Numpad Slash (/) toggles what Blender calls Local View. Basically, Local View hides everything in your scene except for the object or objects you've selected. Local View is really helpful for temporarily isolating a single object or set of objects in a complex scene so that you can work on it without anything else getting in your way.

The Numpad Dot (.) hotkey also comes in handy when you want to focus on a specific part of your scene. Pressing Numpad Dot (.) centers the objects you've selected in the 3D View. Centering is particularly useful if you've rotated or panned everything out of sight, and you want to bring your selected objects back into view.

One other key worth mentioning, although it's not exactly on the numeric keypad, is the Home key. Whereas using Numpad Dot (.) brings your selected objects into view, pressing Home zooms your view back until all objects in your scene are visible in the 3D View. Home is a very convenient key for getting an overall idea of what's going on in your scene.