Generally speaking, an edge loop in Blender is a series of edges that connect to form a path where the first and last edges connect to each other — well, that's the ideal case anyway. This kind of closed edge loop is a "good" edge loop.

Of course, then you probably want to know what a "bad" edge loop is. Well, you can have a path of edges that don't connect at the beginning and end of the loop, but calling these loops bad isn't really accurate. It's better to refer to edge loops that stop before reconnecting with their beginning as terminating edge loops. While you generally want to avoid creating terminating edge loops in your models, you can't always avoid having them, and sometimes you actually need them for controlling how edges flow along the surface of your mesh.

To get a better understanding of the difference between closed edge loops and terminating edge loops, open Blender and add a UV sphere (Shift+A→Mesh→UV Sphere). Tab into Edit mode on the sphere and Alt+right-click one of the horizontal edges on the sphere. This step selects an edge loop that goes all the way around the sphere like the latitude lines on a globe, as shown in the left image.

This loop is a closed edge loop. Press A to deselect all and now Alt+right-click a vertical edge. When you do, you select a path of vertices that terminates at the top and bottom poles, or ­junctions of the sphere, as shown in the right image. That's a terminating edge loop.

The vertical loop doesn't go all the way around because, technically speaking, edge loops rely on four-point poles, or a vertex that's at the junction of four edges. Imagine that following an edge loop is like driving through a city. The four-point pole is like a four-way stop, where you have the option of going left, right, or straight.

Well, to properly follow the loop, you keep traveling straight. However, if you come up to a fork in the road (a three-point pole) or a five-way (or more) intersection, you can't necessarily just go straight and be sure that you're following the loop. Therefore, the loop terminates at that intersection. That's why the horizontal edge loop, which is made up entirely of four-point poles, connects to itself, whereas the vertical loop stops at the top and bottom of the sphere, where all the edges converge to a single junction. 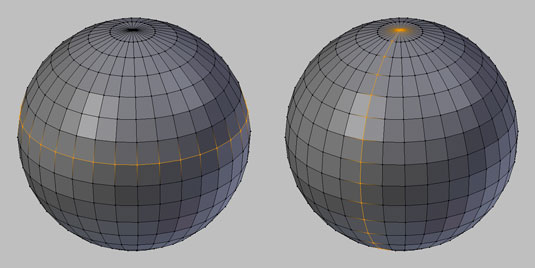 A closed edge loop (left) around a sphere and a terminating edge loop (right) on a sphere.

In addition to edge loops, you can also have face loops. A face loop consists of the faces between two parallel edge loops. The next figure shows horizontal and vertical face loops on a UV sphere. In Blender, you can select face loops when you're in Face Select mode (in Edit mode, press Ctrl+Tab→Faces) the same way you select edge loops in Vertex Select or Edge Select modes: Alt+right-click a face in the direction of the loop you'd like to select.

In some Linux window managers, the Alt key manipulates windows, which supersedes Blender's control of it and prevents you from doing a loop select. Most window managers allow you to remap that ability to another key (like the Super or Windows key).

However, if you use a window manager that doesn't offer that remapping ability, or you just don't feel like remapping that key, you can still select loops by using Shift+Alt+right-click. This key combination is actually for selecting multiple loops, but if you have no geometry (vertices, edges, or faces) selected, it behaves just like Alt+right-click. 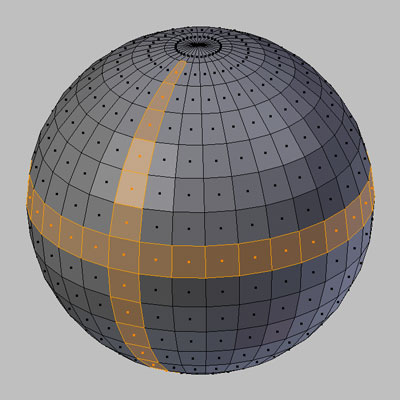 Some face loops selected on a sphere.