This grid system with axes is referred to as the Cartesian grid. The origin, or center, of this grid is at the (0,0,0) coordinate. The difference in the coordinate systems within Blender lies in the way this grid is oriented relative to a selected 3D object. The figure shows the Transform Orientation menu in the 3D View header when you left-click it. 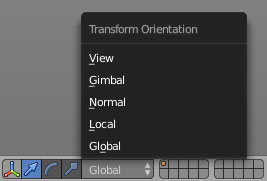 If you're coming from another 3D program, you may find the way Blender handles coordinates a bit disorienting. Some programs (such as Cinema 4D and Maya) have the Y-axis representing vertical movement and the Z-axis going from front to back. Currently, you can't change the coordinate system in Blender to match these programs, so this system is one of those things that migrating users just need to get used to.

You can choose from five orientations: Global, Local, Normal, View, and Gimbal. Working in any of these coordinate systems gives you absolute control of how your object lives in 3D space. Depending on how you'd like to transform your object, one orientation may be more appropriate than the others. Blender also gives you the ability to create custom orientations. After you create a custom orientation, it also becomes available on the Transform Orientation menu.

This list describes details of the five possible orientations:

To relate this concept to the View orientation, assume that your eyes are the View axis. If you look straight ahead and move the book up and down, you're translating it along the View orientation's Y-axis. Gimbal orientation would be if you rotate the book 90 degrees toward you, rotating about its X-axis. Then it's Y and Z axes are locked together. For a clear reference, the 3D manipulator shows the difference between the coordinate systems.

You can quickly change the coordinate system you're using by using the Alt+Spacebar hotkey.