By: Jenn Herman and Eric Butow and Corey Walker and
Updated: 02-08-2018
From The Book: Instagram For Business For Dummies 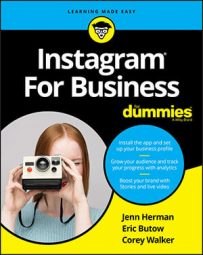 Explore Book Buy On Amazon
Instagram gives you the flexibility to record videos that are as short as 3 seconds or as long as 60 seconds. If you find that 60 seconds is too limiting, use the video as a teaser (think of it as your own movie preview) to get people to click through to your website or to another video website such as YouTube.

Before you record a video, you should know your audience: People younger than 35 prefer 10-second videos, and people 35 and older prefer 30-second spots.

Filming with a smartphone or tablet

When you’re ready to start recording a video on your iPhone, iPad, Android smartphone, or Android tablet, open the Instagram app (if it’s not open already) and then tap the + icon at the bottom of the home screen. In the Library or Photo screen that appears, tap Video.

The Instagram apps on the iPhone, iPad, Android smartphones, and Android tablets all work the same. 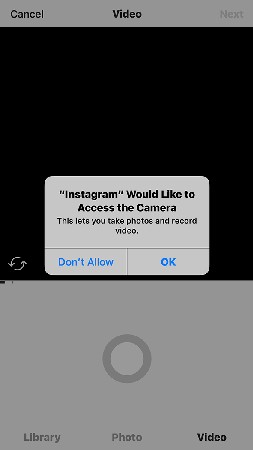 If you want to record silent videos, tap Don’t Allow.

The next time you open the Video screen, you won’t see this pop-up window. If you want to turn your microphone off and on in Instagram, access your smartphone’s settings, open the Instagram settings entry, and then turn the microphone on or off.

To save time, you can record multiple clips in one recording. For example, suppose you're recording a video of your new restaurant. After filming the inside of the restaurant, you don’t want to spend precious video time recording your move to the outside to show the exterior of the building.

After you record your first clip, release your finger. When you’re ready to start recording again, tap and hold down on the record button again. You may repeat this process as many times as you want within the 60-second limit for a video. The timer above the record button continues from the time you paused the recording.

The recording bar places a white line between each clip. In this way, you can see how many clips you have.

If you decide that you want to delete the last video clip you recorded, tap Delete at the bottom of the screen. The color of the Delete button and the recording bar changes to red. Then tap Delete again. The Delete option disappears and the blinking recording bar appears so you can record a new video clip.

If you want to delete more clips, just repeat this process. Easy like Sunday morning.

Checking out your video

After you record your video, you'll want to review it before posting. From the Video screen, tap Next. You see the Filter screen.

If you haven’t recorded for the minimum 3 seconds, you’ll see a pop-up above the minimum bar when you tap Next. This pop-up points to the minimum bar and tells you to record at least to that point. After a few seconds, the pop-up disappears and you can record another clip. 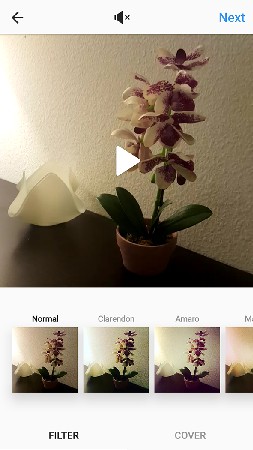 Begin playing the video by tapping the play icon.