By: Jenn Herman and Eric Butow and Corey Walker and
Updated: 06-09-2021
From The Book: Instagram For Business For Dummies 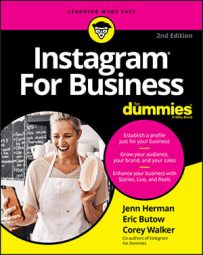 Explore Book Buy On Amazon
So, what is IGTV? IGTV was introduced in 2018 as a standalone app that integrated with Instagram. Sound confusing? It is! IGTV was designed to be its own app for viewing and interactions, and yet it’s tied directly to your Instagram profile. It’s a video-only platform with some unique components.

In this article, we show you the various aspects of IGTV, how you can use it, and what makes it different. We also explain why you’re seeing what you see in the feed.

Even though IGTV is a singular component, it’s accessible from two places in the Instagram app: 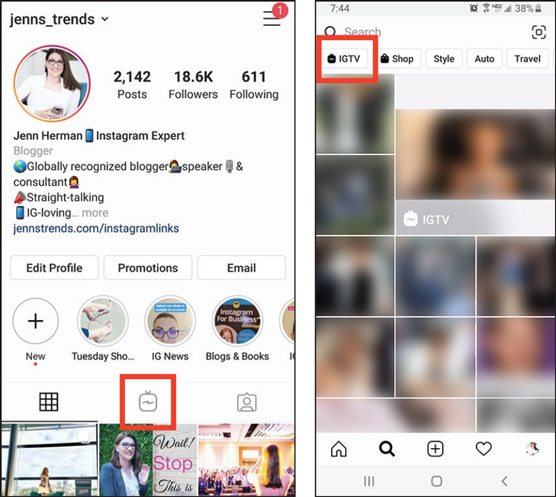 Access IGTV from an account’s profile (left) or the Explore page (right).

In addition to these two locations, you can also see IGTV videos recommended for you on the Explore page. The videos will appear in the list of suggested content, as shown. 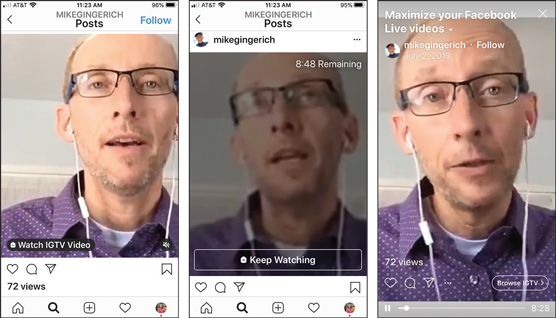 How to find IGTV in the IGTV app

As we already mentioned, IGTV is a standalone app. You can install it from the app store for your device by searching for IGTV. After you’ve installed the app on your device, you can log in as the same account you use on Instagram. All your profile information and followers will transfer to the IGTV app.

After you have your IGTV account set up and you’re in the app, you’ll be taken to the home feed (see the following figure). This is where the videos of the people you follow and those recommended for you will all appear. You can scroll vertically through the videos and tap any video to play it. 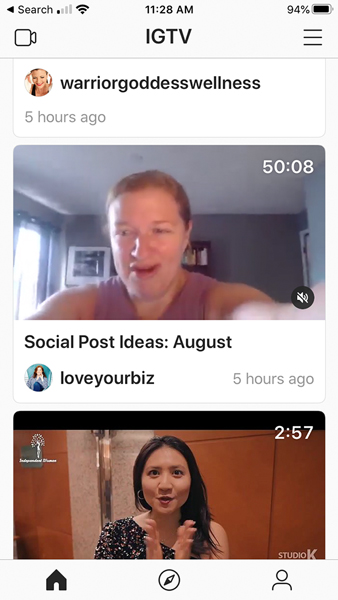 The IGTV home feed is full of videos from those you follow and those recommended for you by Instagram.

How IGTV videos are formatted

IGTV was originally designed to be used only with vertical videos. In addition, the video viewer would not rotate when the mobile device was turned to the horizontal position (as most other video players do).

However, in 2019, Instagram announced that it would start allowing horizontal videos to be uploaded and that those videos would rotate with the screen.

If your IGTV Explore feed has a video that you don’t like or want to see, tap and hold down on the video preview in the feed. Then tap the option for notifying IGTV that you're not interested in that post. Or when viewing a video full-screen, tap the three-dot button at the bottom of the screen to access a menu that enables you to notify IGTV that you're not interested in that post, copy the link to the post, share the video, save the video, or report the video. Tapping the Not Interested menu option tells the algorithm to show you less of that type of content.