Explore Book Buy On Amazon
Data often resides in long, complex tables. Often, you have to visualize only a portion of the table to find a pattern or a trend. A good example is the Cars93 data frame, which resides in the MASS package. This data frame holds data on 27 variables for 93 car models that were available in 1993.

Part of the Cars93 data frame.

One pattern that might be of interest is the distribution of the prices of all the cars listed in the Cars93 data frame. If you had to examine the entire data frame to determine this, it would be a tedious task. A graph, however, provides the information immediately. The following figure, a histogram, demonstrates. 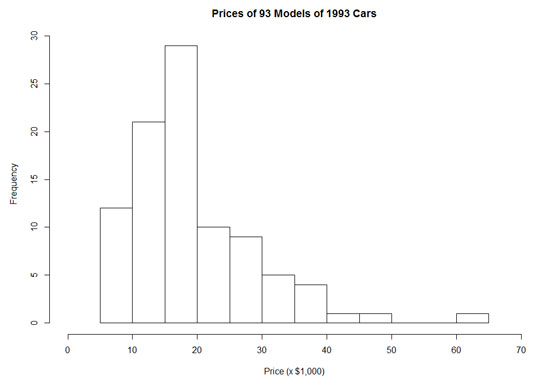 Histogram of prices of cars in the Cars93 data frame.

The histogram is appropriate when the variable on the x-axis is an interval variable or a ratio variable. With these types of variables, the numbers have meaning.

Types and Frequencies of Cars in the Cars93 data frame

The table shows some trends — more midsize and small car models than large cars and vans. Compact cars and sporty cars are in the middle.

This figure shows this information in graphical form. This type of graph is a bar graph. The spaces between the bars emphasize that Type, on the x-axis, is a nominal variable. 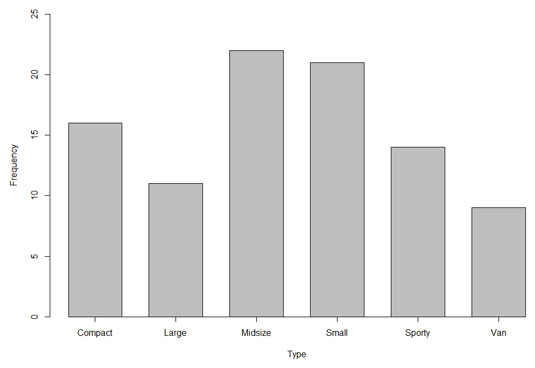 The table as a bar graph.

The pie graph is another type of picture that shows the same data in a slightly different way. Each frequency appears as a slice of a pie. In a pie graph, the area of the slice represents the frequency. 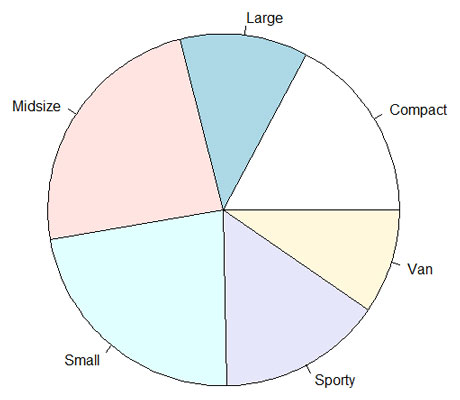 The table as a pie graph.

The plot of scatter

Another potential pattern of interest is the relationship between miles per gallon for city driving and horsepower. This type of graph is a scatter plot. This figure shows the scatter plot for these two variables. 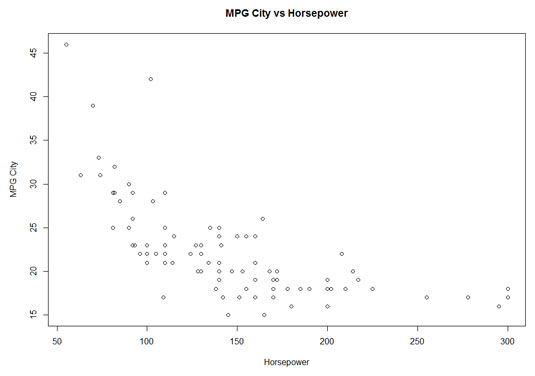 MPG in city driving and horsepower for the data in Cars93.

A quick look at the shape of the scatter plot suggests a relationship: As horsepower increases, MPG-city seems to decrease. (Statisticians would say "MPG-city decreases with horsepower.") Is it possible to use statistics to analyze this relationship and perhaps make predictions? Absolutely!

Of boxes and whiskers

What about the relationship between horsepower and the number of cylinders in a car's engine? You would expect horsepower to increase with cylinders, and this figure shows that this is indeed the case. Invented by famed statistician John Tukey, this type of graph is called a box plot, and it's a nice, quick way to visualize data. 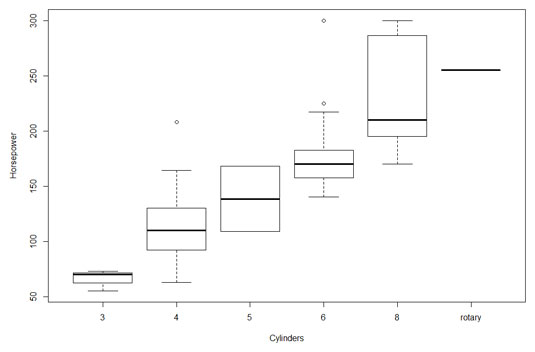 Box plot of horsepower versus number of cylinders in the Cars93 data frame.

Note that the graph shows only a solid line for "rotary," an engine type that occurs just once in the data.