Take a Tour of a Web App Built with Code

Here, you can take a look at a web application built with code. Yelp.com is a website that allows you to search and find crowd-sourced reviews for local businesses like restaurants, nightlife, and shopping. As shown, Yelp did not always look as polished as it does today, but its purpose has stayed relatively constant over the years.

Defining the app’s purpose and scope

Once you understand an app’s purpose, you can identify a few actionable tasks a user should be able to perform to achieve that purpose. Regardless of design, the Yelp’s website has always allowed users to

Successful web applications generally allow for completing only a few key tasks when using the app. Adding too many features to an app is called scope creep, dilutes the strength of the existing features, and so is avoided by most developers.

For example, it took Yelp, which has 30,000 restaurant reviews, exactly one decade after its founding to allow users to make reservations at those restaurants directly on its website. Whether you are using or building an app, have a clear sense of the app’s purpose.

Standing on the shoulders of giants

Developers make strategic choices and decide which parts of the app to code themselves, and which parts of the app to use code built by others. Developers often turn to 3rd party providers for functionality that is either not core to the business or not an area of strength. In this way, apps stand on the shoulders of others, and benefit from others who have come before and solved challenging problems.

Yelp, for instance, displays local listing reviews and places every listing on a map. While Yelp solicits the reviews, and writes the code to display basic listing data, it is Google, which develops the maps used on Yelp’s website. By using Google’s map application instead of building its own, Yelp created the first version of the app with fewer engineers than otherwise would have been required. 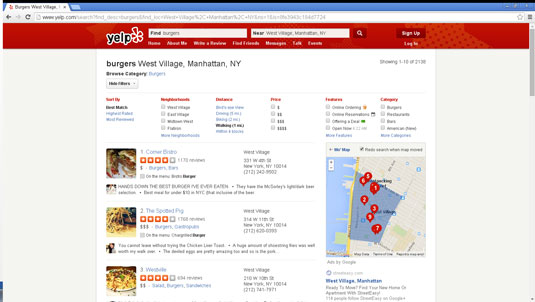