Explore Book Buy On Amazon
You can easily compare examples from your data using calculations if you think of each of them as a vector. The following information describes how to measure similarity between vectors to perform tasks such as computing the distance between vectors for learning purposes.

In a vector form, you can see each variable in your examples as a series of coordinates, with each one pointing to a position in a different space dimension. If a vector has two elements, that is, it has just two variables, working with it is just like checking an item’s position on a map by using the first number for the position on the East-West axis and the second on the North-South axis. 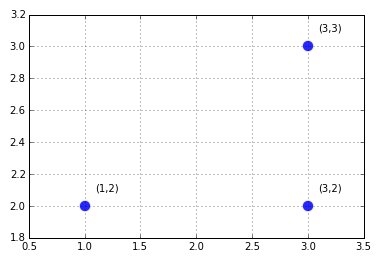 Examples of values plotted as points on a chart.

For instance, the numbers between parentheses (1,2) (3,2), and (3,3) are all examples of points. Each example is an ordered list of values (called a tuple) that can be easily located and printed on a map using the first value of the list for x (the horizontal axis) and the second for y (the vertical axis). The result is a scatterplot.

If your data set, in matrix form, has many numeric features (the columns), ideally the number of the features represents the dimensions of the data space, while the rows (the examples) represent each point, which mathematically is a vector. When your vector has more than two elements, visualization becomes troublesome because representing dimensionalities above the third isn’t easy (after all, we live in a three-dimensional world).

However, you can strive to convey more dimensionalities by some expedient, such as by using size, shape, or color for other dimensions. Clearly, that’s not an easy task, and often the result is far from being intuitive. However, you can grasp the idea of where the points would be in your data space by systematically printing many graphs while considering the dimensions two by two. Such plots are called matrices of scatterplots.

An algorithm can learn by using vectors of numbers that use distance measurements. Often the space implied by your vectors is a metric one that is a space whose distances respect certain specific conditions: Distances that measure a metric space are the Euclidean distance, the Manhattan distance, and the Chebyshev distance. These are all distances that can apply to numeric vectors.

The Chebyshev distance or maximum metric takes the maximum of the absolute difference between the elements of the vectors. It is a distance measure that can represent how a king moves in the game of chess or, in warehouse logistics, the operations required by an overhead crane to move a crate from one place to another.

In machine learning, the Chebyshev distance can prove useful when you have many dimensions to consider and most of them are just irrelevant or redundant (in Chebyshev, you just pick the one whose absolute difference is the largest). In the example used in above, the distance is simply 2, the max between (1–3) and abs(2–3).