For example, booking travel is easier using web applications, especially since the steps necessary — reviewing flights, hotels, and rental cars, and then purchasing all three — are best achieved with multiple windows, access to a calendar, and the entry of substantial personal and payment information.

Starting with HTML, CSS, and JavaScript

Simple websites, such as the one shown, are coded using HTML, CSS, and JavaScript. HTML is used to place text on the page, CSS is used to style that text, and JavaScript is used to add interactive effects like the Twitter or Facebook Share button that allows you to share content on social networks and updates the number of other people who have also shared the same content. 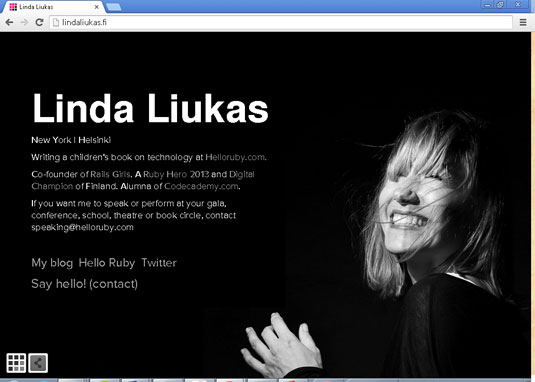 Websites conveying mainly static, unchanging information are often coded only in these three languages. You will learn about each of these languages in later chapters.

Websites with more advanced functionality, such as user accounts, file uploads, and e-commerce, typically require a programming language to implement these features. Although Python, Ruby, and PHP are not the only programming languages these sites can use, they are among the most popular.

This popularity means there are large online communities of developers who program in these languages, freely post code that you can copy to build common features, and host public online discussions that you can read for solutions to common issues.

Each of these languages also has popular and well documented frameworks. A framework is a collection of generic components, such as user accounts and authentication schemes that are reused frequently, allowing developers to build, test, and launch websites more quickly. You can think of a framework as similar to the collection of templates that comes with a word processor.

You can design your resume, greeting card, or calendar from scratch, but using the built-in template for each of these document types helps you create your document faster and with greater consistency. Popular frameworks for these languages include