Getting to Know the Elastic Compute Cloud (EC2) AWS Service

By: John Paul Mueller and
Updated: 11-14-2017
From The Book: AWS For Developers For Dummies 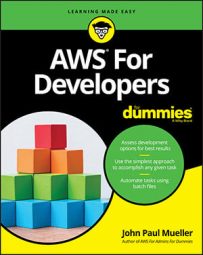 Explore Book Buy On Amazon
Consider the meaning of elastic in many of the AWS service names. When you see the word elastic, you should think of the ability to stretch and contract. All the AWS documentation alludes to this fact, but it often makes the whole process sound quite complicated when it really isn’t. Just think about a computer that can stretch when you need more resources and contract when you don’t.

With AWS, you pay only for the services you actually use, so this capability to stretch and contract is important because it means that your organization can spend less money and still end up with just the right amount of services needed.

Even though some members of your organization might fixate on the issue of money, the real value behind the term elastic is time. Keeping your own equipment right sized is time consuming, especially when you need to downsize. Using EC2 means that you can add or remove computing capacity in just a few minutes, rather than weeks or months. Because new requirements tend to change quickly today, the capability to right-size your capacity in minutes is crucial, especially if you really do want that pay raise.

In addition, you can simulate failure conditions and thereby build a troubleshooting notebook before you release an application to production. Just as you do with your local server, you have choices to make when building an EC2 instance (a single session used to perform one or more related tasks). The instance can have these characteristics:

As the tasks that you assign to an instance change, so can the instance configuration. You can adjust just the memory allocation for an instance or provide more storage when needed. Most developers don’t worry too much about how much things cost, but that situation changes as you move to the cloud. Your test system will require an investment, so knowing your options could reduce operating costs and make you look better in the boss’s eyes. Here are the pricing models available with EC2:

Autoscaling is an EC2 feature that you use to ensure that your instance automatically changes configuration as the load on it changes. Although it represents a great solution for administrators on production systems, it could pose problems for developers in the test environment because you can’t be sure about the characteristics of your test setup. In general, you want to avoid using autoscaling on test systems so that you can maintain firmer control over test conditions.

AWS also provides distinct security features. Developers are usually well acquainted with most of these features from a programming perspective. However, here is a summary of the security features used with EC2:

No amount of security will thwart a determined intruder. Anyone who wants to gain access to your server will find a way to do it no matter how high you build the walls. In addition to great security, you must monitor the system and, by assuming that someone will break in, deal with the intruder as quickly as possible. Providing security keeps the less skilled intruder at bay as well as helps keep essentially honest people honest, but skilled intruders will always find a way in.

The severity of these breaches varies, but it can actually cause businesses to fail, as in the case of Code Spaces. A number of security researchers warn that AWS is prone to security lapses. However, don’t assume that other cloud services provide better security. Anytime you use external services, you take significant risks as well.

A final consideration is the use of storage. Each instance comes with a specific amount of storage based on the kind of instance you create. If the instance storage doesn’t provide the functionality or capacity you need, you can also add Elastic Block Store (EBS) support. The main advantage of using EBS, besides capacity and flexibility, is the capability to define a specific level of storage performance to ensure that your application runs as expected.