The Xbox 360 audio connection that you should use depends on the sound system that you connect to your Xbox 360 console:

• A sound system with a Toslink digital audio input

You make an Xbox 360 digital audio connection by using an optical cable (called a Toslink). To connect your Xbox 360 to your stereo using a digital cable, follow these steps:

1. Make sure that you're using one of the following Xbox 360 AV cables that connects digital audio:

• S-Video is the only standard TV cable that works with digital audio.

2. Connect a Toslink cable to the connecting plug of your AV cable.

Turn the stereo volume down before you connect the cable.

3. Plug the Toslink cable into your receiver.

The manufacturer sometimes covers this input to prevent dust from damaging the input. Check your input; it may be covered by either of the following:

• A small square-shaped plug in the input

4. Switch your receiver to the digital audio source.

5. Fire up the Xbox 360 and pick the appropriate digital output type in the System blade.

This has been the standard connection method since before the original Atari game console was released.

Don't have an optical input? Use analog audio and hook up with the RCA cables.

If you can't use an optical input, you have two ways to make an analogaudio connection from your Xbox 360:

Connecting directly to the stereo system may improve sound quality a bit. Analog audio usually sounds better when you reduce the number of connections between the signal's source and its destination.

Extra connections may hurt the sound quality a little. Your TV set can automatically send the matching audio to your sound system when you change video sources (such as satellite boxes and VCRs).

Many TVs that have audio outputs have two options:

• Variable output: Adjusts its output volume based on the volume setting on the TV (and the TV remote control)

• Fixed output (sometimes called "audio out" or "line out"): Volume is not adjustable with the TV remote control

If you use analog Xbox 360 audio output, you can choose between two types of output:

• ".1"surround sound systems, like Dolby Pro Logic II, can use a subwoofer.

When you use mono, it doesn't matter which Xbox 360 audio jack you connect to your sound system. If your TV sound system only has oneaudio jack (usually white), you may find that this the best connection.

If you use mono sound with a multispeaker sound system (like a stereo TV or a surround sound audio system), you can hear sound from all the speakers, but you can't tell the directionof the sound:

• Sounds are behind or in front of you

• Sounds are on your left or right

If you need to use mono sound with your Xbox 360, follow these steps:

1. Open the System blade of the Xbox 360 Dashboard.

2. Select Console Settings and press the A button.

Under Analog Output, you have two choices (as you can see in Figure 1): 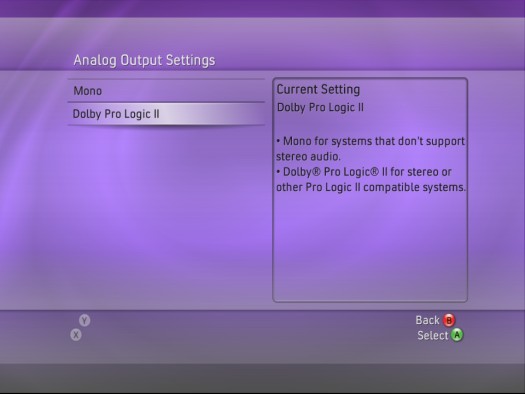 Figure 1: You have only two options for analog output, Mono or Dolby Pro Logic II.


5. Select Mono and press the A button.

You may find Dolby Pro Logic II the best analog audio setting if your sound system has:

You usually have a red input jack and a whiteinput jack.