How to Adjust Sounds on Your iPad

The iPad lets you adjust sound setting in two ways: You can adjust the volume for all apps on your iPad, and you can specify whether system sounds play for events such as new e-mail, calendar alerts, and keyboard clicks.

To adjust the system volume from the Settings dialog, in General settings, tap Sounds. In the Sounds dialog that appears, tap and drag the slider to the right to increase the volume or to the left to lower it. 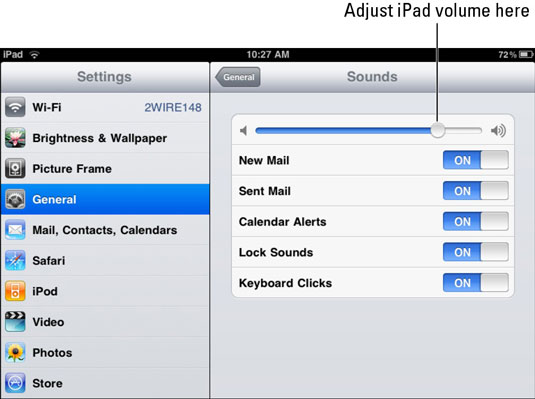 With the release of iOS 4.2 for iPad, the Screen Rotation Lock switch's functionality was changed to serve as the Mute button. Another way to mute your iPad is to hold down the volume switch (below the Mute button on the top-right corner of the device) until the sound is effectively off.

Turning system sounds on and off

Usually, people are either big fans or big haters of system sounds on computers, like the bleep you get when a new e-mail arrives. iPad also makes sounds when certain other events occur, if you want it to. You can turn on and off the following system sounds:

To turn any of these off or on, from the Settings dialog, tap General, then tap Sounds and use the sliders for each setting to turn them on or off.