What Is an Electronic Schematic?

Explore Book Buy On Amazon
A schematic (pronounced "skee-mat-ick") is a diagram of a circuit. Schematics use symbols to represent circuit components and lines to show the connections between components. What schematics don't do is tell you how to arrange your circuit (or whether or not to use foam cutouts). It's up to you to decide how to lay out your circuit.

Have you ever played a musical instrument or sung in a chorus? If so, you may have some experience reading sheet music. Sheet music uses symbols to represent musical notes, such as middle C, D, and E. Composers use musical notation to write melodies that they create.

Something similar happens in electronics. When people design circuits, they use symbols to represent the circuit components in a diagram so that the design can be captured on paper (or on a computer).

It's difficult to build a circuit that has more than a few components if you don't have a schematic to guide you. Imagine building a large house without using a drawing, or blueprint, listing the materials, dimensions, and locations of all the components used to construct the house. Schematics are as essential to electronics as blueprints are to construction.

The figure shows the schematic for the LED flashlight circuit, along with labels for the components. 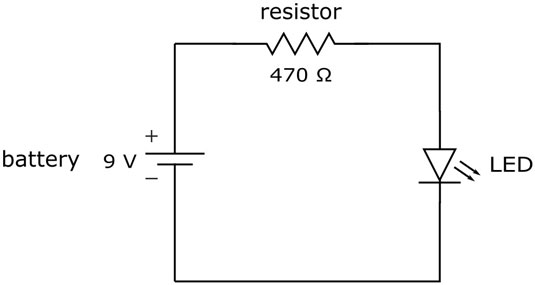 Note that the symbol for the resistor is symmetrical, meaning that you could flip it and it would still be the same, but the symbols for the battery and the LED are not symmetrical. Remember that it doesn't matter which way you insert resistors in the circuit, but it does matter with LEDs and batteries. The symbols give you a hint about whether a component must be inserted a certain way or not.

The schematic also tells you the following information:

Think about your LED flashlight. Do the components and the connections you made match those shown in the schematic?

This figure shows the schematic for an LED circuit with a switch added. The switch is open (meaning off) in this schematic. So this schematic represents your circuit when you're not pressing down on the foam cutout. 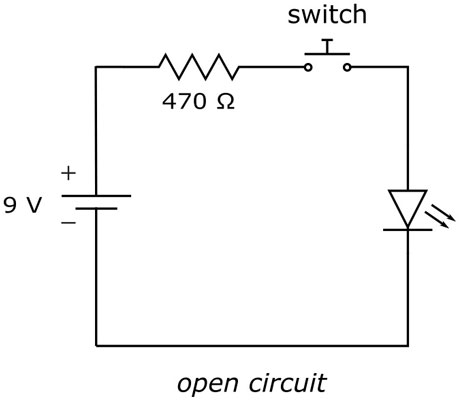 LED circuit with a switch added.

The diagram shown here represents your circuit when you are pressing down on the foam cutout, causing the LED and resistor leads to make contact with each other. (In case you're wondering, the hand in the diagram is not an official circuit symbol!) The switch in this diagram is closed (meaning on). This circuit is a closed circuit, and current flows around the circuit — and the LED lights — because the path is complete.

Do the schematics help you visualize what's going on in your LED flashlight circuit? If you know how to read schematics, you will find it easier to understand how circuits work. And when you start building more advanced circuits, you'll rely on schematics to guide you as you build — and troubleshoot — your circuits.