The diagram shown depicts a battery-operated circuit that powers a light-emitting diode (LED), much like what you might find in a mini LED flashlight. What you see in the figure is a circuit diagram, or schematic, that shows all the components of the circuit and how they are connected. 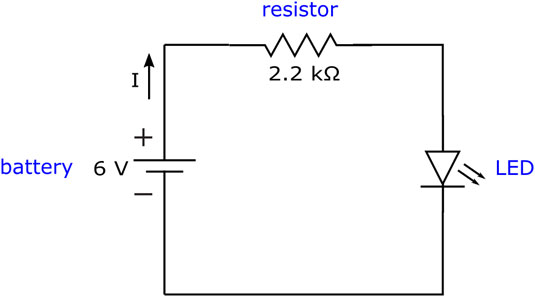 Current delivers electrical energy from the battery to the resistor and the LED.

The zigzag symbol in the circuit diagram represents a resistor. The role of the resistor is to limit the amount of current that flows through the circuit, much like a kink in a garden hose restricts water flow. Resistance is measured in units called ohms (symbolized as Ω) and that the resistor in this circuit is keeping the LED from being destroyed.

The LED is symbolized by a triangle with a line segment on one end and two arrows pointing outward. The triangular part of the symbol represents a diode, and the two arrows facing out represent the fact that this diode emits light (hence, it is a light-emitting diode). Diodes are part of a special class of electronic component known as semiconductors.

By building this circuit and taking some measurements of voltages and current, you can learn a lot about how circuits work. And voltage and current measurements are the key to finding out how the electrical energy generated by the battery is used in the circuit.