How a Flashlight Is Energized

Explore Book Buy On Amazon
The battery's job is to provide the electrical energy needed to power the LED in your flashlight circuit. Chances are you're familiar with 9-volt batteries like the one shown.

Every battery has two terminals, which are the metal pieces that stick out from the top of a 9-volt battery (see the following figure) or the metal ends of an AA, AAA, C, or D battery. One terminal is positive and is labeled with a +. The other terminal is negative and isn't labeled. Locate the positive and negative terminals on your 9-volt battery. Note that the two terminals look different. 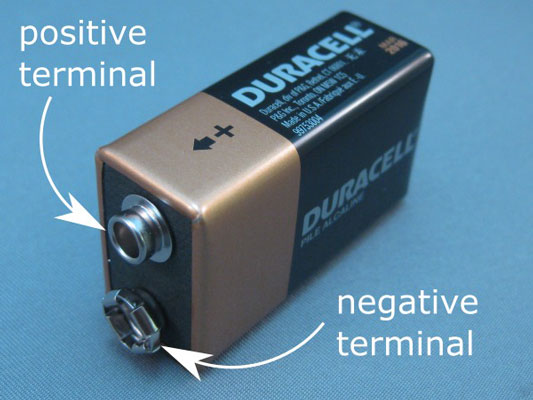 A 9-volt battery needed for a flashlight.

When you connect a battery in a circuit, the battery's voltage forces electrons to flow out of the battery, through the circuit, and then back into the battery. But what are electrons, you ask?

Electrons are tiny particles that have a special quality known as negative charge. Electrons exist inside atoms, which are the building blocks of matter. When a bunch of electrons break loose from their atoms and travel together in the same direction, that flow of electrons is called electric current, or simply current.

In your LED flashlight circuit, electric current gives your LED the energy it needs to light up. And the 9-volt battery provides the energy (voltage) needed to push the current through the circuit.

Batteries are one type of voltage source, providing voltage to force current to flow through circuit components.

Technically, what you call a battery is really a cell. A battery is really two or more cells connected together electrically. It's good for you to know that, but you can still use the term battery to refer to a cell (as do most people).