Explore Book Buy On Amazon
Diodes do a simple but important job: They allow current to flow in just one direction. A special kind of diode — a light-emitting diode, or LED — is often used for the purpose of, well, lighting up. You have to be careful to orient the LED the correct way, or current won't flow at all.

Another kind of diode performs the important task of preventing current from flowing the wrong way in your circuit. This type of diode — a 1N4148 (or 1N914) diode — doesn't light up. It just does its job as a one-way valve for current without calling attention to itself.

Pictured here, the 1N4148 diode is a signal diode. A signal diode is designed to handle relatively small currents and voltages. Diodes that can handle large current and voltages are known as power diodes. 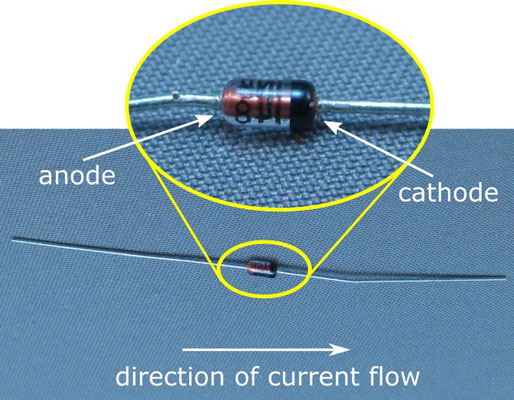 The black band at one end of the 1N4148 diode indicates the cathode (negative side). Current flows from the anode (positive side) to the cathode, but not the other way. (Some types of diodes have a silver band instead of a black band to indicate the cathode.)