By: Cathleen Shamieh and
Updated: 09-17-2021
From The Book: Electronics For Dummies

Explore Book Buy On Amazon
You need a closed path, or closed circuit, to get electric current to flow. If there's a break anywhere in the path, you have an open circuit, and the current stops flowing — and the metal atoms in the wire quickly settle down to a peaceful, electrically neutral existence.

A closed circuit allows current to flow, but an open circuit leaves electrons stranded.
Picture a gallon of water flowing through an open pipe. The water will flow for a short time but then stop when all the water exits the pipe. If you pump water through a closed pipe system, the water will continue to flow as long as you keep forcing it to move.

Open circuits are often created by design. For instance, a simple light switch opens and closes the circuit that connects a light to a power source. When you build a circuit, it's a good idea to disconnect the battery or other power source when the circuit is not in use. Technically, that's creating an open circuit. 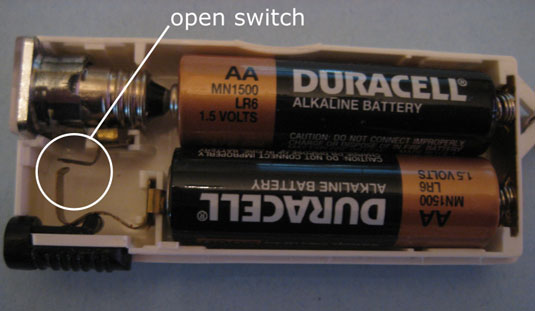 A switch in the open position disconnects the light bulb from the battery, creating an open circuit.
Turning the flashlight on by sliding the black button to the left pushes the two pieces of metal together — or closes the switch — and completes the circuit so that current can flow.

Closing the switch completes the conductive path in this flashlight, allowing electrons to flow.

Sometimes open circuits are created by accident. You forget to connect a battery, for instance, or there's a break in a wire somewhere in your circuit. When you build a circuit using a solderless breadboard, you may mistakenly plug one side of a component into the wrong hole in the breadboard, leaving that component unconnected and creating an open circuit. Accidental open circuits are usually harmless but can be the source of much frustration when you're trying to figure out why your circuit isn't working the way you think it should.

Short circuits are another matter entirely. A short circuit is a direct connection between two points in a circuit that aren't supposed to be directly connected, such as the two terminals of a power supply. Electric current takes the path of least resistance, so in a short circuit, the current will bypass other parallel paths and travel through the direct connection. (Think of the current as being lazy and taking the path through which it doesn't have to do much work.) 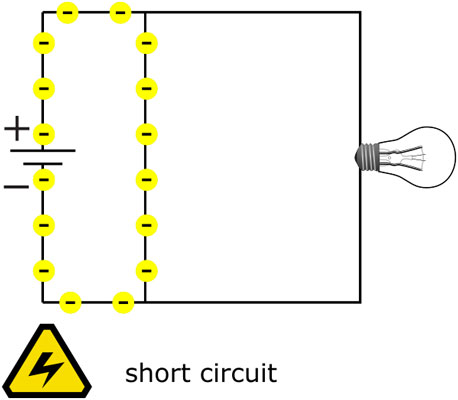 In a short circuit, current may be diverted from the path you intended it to flow through.

If you short out a power supply, you send large amounts of electrical energy from one side of the power supply to the other. With nothing in the circuit to limit the current and absorb the electrical energy, heat builds up quickly in the wire and in the power supply. A short circuit can melt the insulation around a wire and may cause a fire, an explosion, or a release of harmful chemicals from certain power supplies, such as a rechargeable battery or a car battery.