How to Organize and Manage Samsung Galaxy Tab Apps 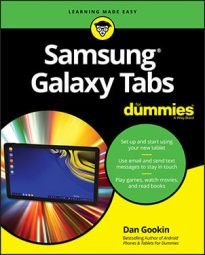 Lots of interesting doodads bespeckle your tablet's Home screen, like bugs on a windshield after a long trip. The two items you'll notice the most are apps and widgets.

How to add an app to the Galaxy Tab Home screen

When new apps are installed on the Galaxy Tab, a launcher icon is automatically affixed to the Home screen representing that app. You can perform this action manually, which helps put the apps you use most within easy reach. Here's how that works: 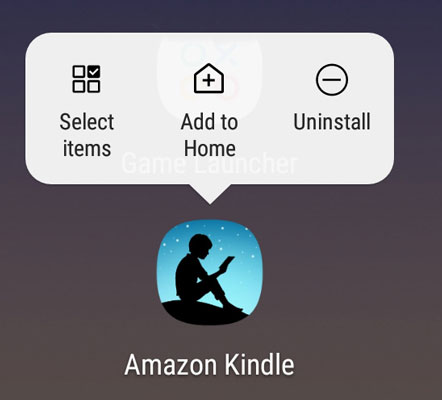 Stick an app on the Home screen.

For more precise action, after Step 3, drag the icon up to the top of the Apps screen, where you see the text Drag Here to Add to Home Screen, or you can continue to long-press the icon and eventually the Home screen appears. Continue to drag the icon to a specific location. Lift your finger to place it at that spot.

The app hasn't moved: What you see is a launcher, which is like a shortcut. You can still find the app on the Apps screen, but now the app is — more conveniently — available on the Home screen.

A great way to keep similar apps together on the Home screen is to bundle them into folders. For example, I have a Watch folder on my Tab full of apps that show movies and TV shows. 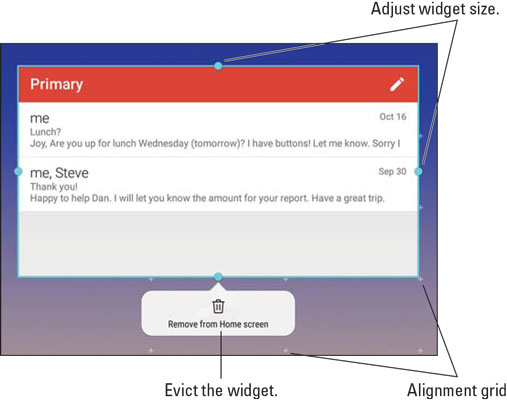 Adding a widget to the Home screen.

Once a folder is created, you can add another launcher quickly by long-pressing its icon and dragging it into the folder.

To remove a launcher from a folder, tap to open and view the folder’s contents. Long-press the icon and drag to the text at the top of the screen: Drag Here to Remove from Folder.

How to manage your Samsung Galaxy apps

The good news is that you really don’t have to worry about managing apps on your Galaxy Tab. The Android operating system deftly handles that task for you. The bad news is that occasionally you may need to delicately dip your big toe into the app management sea. That’s why I wrote this section.

How to update Samsung Galaxy apps

App updates happen all the time. They’re automatic. Occasionally, you’re called upon to perform a manual update. How can you tell? The Updates Available notification appears. Here’s how to deal with that notification:

The apps are individually updated. You can view the progress in the Play Store app or go off and do something else with your Tab.

How to uninstall a Samsung Galaxy app

I can think of a few reasons to remove an app. It's with eager relish that I remove apps that don't work or somehow annoy me. It's also perfectly okay to remove redundant apps, such as when you have multiple eBook readers that you don't use. Whatever the reason, follow these directions to uninstall an app: The app continues to appear on the All tab on the My Apps screen even after it's been removed. After all, you installed it once.

You can't remove apps that are preinstalled on the tablet by either Samsung or your cellular provider. I'm sure there's probably a technical way to uninstall the apps, but seriously: Just don't use the apps if you want to remove them and discover that you can't.

One way to avoid apps you don’t like is to place them into an Apps screen folder.

How to choose a default app to open a file

Every so often, you may see the Open With or Complete Action Using prompt, similar to the one shown here.

Multiple apps are available that can deal with your request. You pick one and then choose either ALWAYS or JUST ONCE.

When you choose ALWAYS, the same app is used for whatever action took place: compose email, listen to music, choose a photo, navigate, and so on.

When you choose JUST ONCE, you see the prompt again.

My advice is to choose JUST ONCE until you get sick of seeing the prompt. At that point, after choosing the same app over and over, choose ALWAYS.

The fear, of course, is that you’ll make a mistake. Keep reading in the next section. (The technology industry uses the word default way too often.)

How to clear a default app

Fret not, gentle reader. The settings chosen for the Complete Action Using prompt can be undone. For example, if you select the Docs app from the preceding screen, you can undo that choice by following these steps: After you clear the defaults for an app, you see the Open With or Complete Action Using prompt again. The next time you see it, however, make a better choice.

How to set a default Samsung Galaxy app

Beyond apps that open files, the Galaxy Tab also has default apps for completing some system-wide tasks. For example, if you tap a web page link and the Tab has more than one web browser installed, you can choose which one to use.

If you desire to change one of the defaults, such as the Browser App, tap that item and select a new app from the list.

Beyond the Browser app, you can choose which app to run as the Home screen, and the Device Assistance app.

How to shut down a Samsung Galaxy app run amok

It happens. Sometimes, an app goes crazy and just won’t stop. Although Google tries to keep unstable apps out of the Play Store, not all technology is perfect. If you need to smite an errant app, follow these steps:

Only stop an app that you truly cannot halt in any other way.

If the app you want to halt appears as a launcher on the Home screen, long-press it to see a pop-up bubble appear. Choose the action Disable from the list.

The problem with randomly quitting an app is that data may get lost or damaged. At the worst, the tablet may become unstable. One way to fix that situation is to restart the device.

How to organize the Samsung Galaxy Tab Apps Screen

The go-to place for apps on your Galaxy Tab is the Apps screen. It lists all available apps on your tablet — plus, it’s something you can customize to make accessing your apps easier.

How to rearrange apps on the Apps screen

Apps appear on the Apps screen in any old order, with new ones you add showing up on the far right page. Two options are available to change their organization.

First, you can sort the apps. Heed these directions:

If you instead choose the Custom Order option, the apps appear as originally presented.

Second, you can drag app icons to change their order, though this operation is tricky: Long-press an app icon, and then slide it to a new position on the current page or to the far right to add a new Apps screen page. This operation can get you into trouble, as dragging the icon too far may set it on the Home screen, or you might unintentionally create an Apps Screen folder.

All changes made take effect immediately.

How to work with the Samsung Galaxy apps screen folders