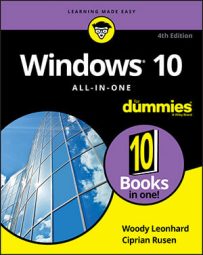 Explore Book Buy On Amazon
Adjusting to a new operating system, whether you're upgrading from an old version of Windows to Windows 10 or you've purchased a new machine running Windows 10, isn't an easy thing to do. In this cheat sheet, you'll find out what you should do right away, what you shouldn't do, and how to find the features you're used to. You also will find some tips for keeping your sanity while adjusting to your new operating system.

How to get the most out of Windows 10

You need to quickly do a few things to get the most out of your Windows 10 operating system. Here’s what you need to do, like, pronto:

Cloud storage is a marketing term — when a company talks about storing data in their cloud, they’re just saying you should put it on their computers.

What you shouldn't do with Windows 10

Windows 10 is different from any Windows operating system you’ve used before, in both good and bad ways. Here’s how to keep your head while others all about you are losing theirs:

How to find what you need in Windows 10

If you’re going from an earlier version of Windows to Windows 10, you might be wondering, “Where the heck did Microsoft put it?” about any number of features.

If you’re going from Windows 7 to Windows 10, here’s what’s changed:

Upgrading from Windows 8 or 8.1

Many people drive themselves insane when they’re adjusting to a new machine or new operating system like Windows 10. Here are five tips to avoid the insanity: