How to Open Windows 10 Apps

Windows 10 For Seniors For Dummies 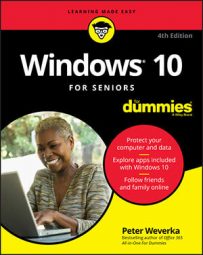 Explore Book Buy On Amazon
The Windows 10 Start screen is home to numerous programs, or apps (short for applications). An app performs a function or displays information. For example, the Weather app offers weather reports (surprise!) and the Maps app helps you map a route between two places. Apps can be simple or complex.

Apps appear on the Start screen as tiles. A tile, which may be square or rectangular, displays the app’s name and symbol or icon. A tile that displays changing information is called a live tile. An open app typically covers the screen, hiding other apps that are open. However, some apps can be displayed side-by-side with a function called snap.

Two categories of apps are available:

You select an app to use in one of two ways: In this chapter, you open, close, and use some of the apps that come with Windows 10. You also switch between apps and the Start screen, and switch directly between two apps. You find out how to search for apps not shown on the Start screen. Finally, you discover how to organize the Start screen by rearranging tiles into groups.

Although some steps are specific to one app, most of the steps you follow here can be repeated in any app.