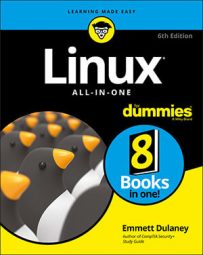 The firewall runs software on your Linux system that examines the network packets arriving at its network interfaces and then takes appropriate action based on a set of rules. The idea is to define these rules so that they allow only authorized network traffic to flow between the two interfaces. Configuring the firewall involves setting up the rules properly. A configuration strategy is to reject all network traffic and then enable only a limited set of network packets to go through the firewall. The authorized network traffic would include the connections necessary to enable internal users to do things such as visit websites and receive electronic mail.

To be useful at protecting your Linux system, a firewall must have the following general characteristics:

A firewall can take many forms. Here are three common forms of a firewall you might find on a Linux system:

Packet filter firewalls are fast and flexible, but they can’t prevent attacks that exploit application-specific vulnerabilities or functions. They can log only a minimal amount of information, such as source IP address, destination IP address, and traffic type. Also, they’re vulnerable to attacks and exploits that take advantage of flaws within the TCP/IP protocol, such as IP address spoofing, which involves altering the address information in network packets to make them appear to come from a trusted IP address.

Opening many ports to incoming traffic creates a risk of intrusion by unauthorized users who abuse the expected conventions of network protocols such as TCP. Stateful inspection firewalls solve this problem by creating a table of outbound network connections, along with each session’s corresponding internal port. Then this state table is used to validate any inbound packets. This stateful inspection is more secure than a packet filter because it tracks internal ports individually rather than opening all internal ports for external access.

The advanced functionality of application-proxy gateway firewalls, however, results in some disadvantages compared with packet filter or stateful inspection firewalls:

Because of the full packet awareness found in application-proxy gateways, the firewall is forced to spend significant time reading and interpreting each packet. Therefore, application-proxy gateway firewalls generally aren’t well suited to high-bandwidth or real-time applications. To reduce the load on the firewall, a dedicated proxy server can be used to secure less time-sensitive services, such as email and most web traffic.

Most firewalls implement a combination of these firewall functionalities. Linux systems are no different. Many vendors of packet filter firewalls or stateful inspection firewalls have also implemented basic application-proxy functionality to offset some of the weaknesses associated with their firewalls. In most cases, these vendors implement application proxies to provide better logging of network traffic and stronger user authentication. Nearly all major firewall vendors have introduced multiple firewall functions into their products in some manner.

In a large organization, you may also have to isolate smaller internal networks from the corporate network. You can set up such internal firewalls the same way that you set up Internet firewalls.

Emmett Dulaney is a university professor and columnist for Certification Magazine. An expert on operating systems and certification, he is the author of CompTIA Security+ Study Guide, CompTIA A+ Complete Study Guide, and CompTIA Network+ Exam Cram.