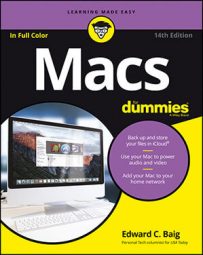 Explore Book Buy On Amazon
Macs and Windows computers have unique operating systems. They see things differently, and most Mac users would argue that Macs do things better. Macs come equipped with helpful keyboard shortcuts and a short list of procedures to follow if your Mac freezes.

If you don’t want to scroll through menus looking for a particular command, you can use handy Mac keyboard shortcuts to do things with a key press or two . . . or sometimes three.

What to do when your Mac freezes

You know that frustrating, annoying, sometimes panicked feeling you get when your computer isn’t doing what you expect? If an application freezes or your Mac is generally misbehaving, try these tips to escape with minimal disruption.

5 Mac features to check out

Macs are full of fun and useful applications. Check out the following features as you need them or have the time. Your Mac adventures await.