What You Should Know about Arduino Sensors: Using Capacitive Sensors

Consider the following when you are planning a sensor for your Arduino project:

If the antenna is made from a reel of wire or a piece of foil, you can extend the range of the sensor beyond touch, which is known as a projected capacitive sensor. Using a capacitive sensor you can detect a person’s hand a few inches away from the antenna, which creates a lot of new possibilities for hiding sensors behind other materials. These discreet capacitive sensors are now commonly seen in many recent consumer electronics to remove physical buttons and maintain the sleek shape of the product. The electronics can also be placed under layers of other material, protected from the outside world.

Capacitive touch sensors are easy to make. The difficulty with projected field sensors to determine the range of the field. The best way to determine this range is by experimentation, testing to see whether the field that you're generating is far-reaching enough.

The cheapest option is to use the CapSense library for Arduino, which allows you to make a capacitive sensor with an antenna and no additional hardware! You can spend a few cents for an antenna or repurpose an old one.

Getting the CapSense Arduino library

The CapSense library is available from GitHub, an online repository of software that manages different versions and allows you to see who has updated the software, and how. It’s an excellent system for sharing and collaborating on code projects. You can find the Arduino platform on GitHub; check it out if you’re curious about any changes. To get the library:

For this project, you need the following: As you can see below, little work is needed. You can simply have a wire antenna connected to pin 5, and you can enlarge your antenna by connecting it to any other conductive surface. Crocodile clips are useful to latch onto different antennas quickly and easily. 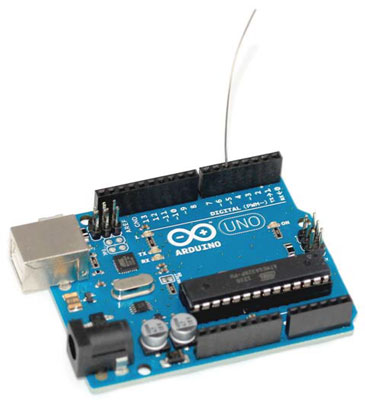 A photo of a DIY capacitive sensor.

Press the Compile button to check your code. Compiling highlights any grammatical errors, which light up in red. If the sketch compiles correctly, click Upload to send the sketch to your board. When it has finished uploading, open the serial monitor, set the baud rate to 115200, and touch or approach the antenna. You should see two values racing down the screen. On the left is the raw value being read; on the right is the same reading after smoothing.

If nothing happens, double-check your wiring:

At the start of the CapPinSketch sketch in the declarations, a new CapPin object is named. Note that cPin_5 is the name and it is assigned to pin 5 using CapPin(5): A float named smoothed is declared to store the processed value of the sensor: In setup, serial communication is started on a baud rate of 115200, and the message start is sent to indicate to you that the serial port is connected: This commented line is not used in this sketch but is referenced in some of the other CapSense examples. It can be uncommented to include further calibration functions that are in the library but is not be covered in this example: In this sketch, many variables are declared locally. Because they're not needed outside the loop, they're removed after each loop and redeclared at the start of the next loop.

First, a one-millisecond delay occurs to help improve the stability of the reading:

Next, the long variable total1 is declared. This variable can look confusing because the lowercase L and the numeral 1 look the same in most fonts. Incidentally, this variable is not used in this sketch. It may well be left over from a previous version: The next long variable is set to the current millis () value. Because this variable is local, the value is reset on each loop: The specific function .readPin() reads your capacitive pin: If you want to explore in more depth what's happening, look at CapPin.cpp in the CapSense library. At first, the CapPin.cpp file looks baffling, but by reading the line that follows, you can see that the value relates to the number of samples that the Arduino is taking of the capacitance reading:

Editing the inner workings of libraries is not advised for beginners, but it is good to have a look at them to know what’s happening in your code and try to gain a better understanding of them.

A smoothing function is also included in the sketch. This function takes the raw reading from the sensor, the smoothing value, and then the output variable. At present, the smoothing value is set to 0.8, but go ahead and experiment with this value to find the appropriate amount of smoothing for your application. This amount is dependent on how fast the loop is completed and how many readings are made in that time, so bear that in mind if you expect to add a lot of other controls or outputs: Finally, the values are printed to the serial port to be monitored. millis() – start gives the time that is taken to carry out the reading. If more samples are taken or any delays are added to the code, these activities increase the time to complete the loop and, therefore, the reaction time of the sensor: Tabs are used to neatly space the values. The total and smoothed values are both printed for comparison. You may notice a slight delay in the response time of the smoothed value. This delay shows you that your Arduino is reading many more values to do the smoothing, which takes time. This delay is barely noticeable when the sensor is in use because the baud rate is so high: At the bottom of the sketch outside the main loop is an additional function, referred to as a lowpass filter, which gives you the smoothed result. You can see that rather than starting with void, as is the case in setup () and loop (), the function starts with int, which means that an integer value is returned. Starting with int indicates that this function returns an integer value rather than a floating-point value.