By: The National Alliance For Youth Sports and
Updated: 03-26-2016
From The Book: Coaching Volleyball For Dummies 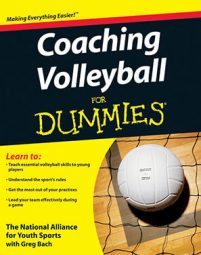 If you're a volleyball coach, strive to deliver great game talks, whether pregame, midmatch, or postgame. Two messages are critical to each delivery: motivation and positive thinking.

A great pregame speech — one that has kids on the edge of their seats and filled with excitement to take the court — is a great way to begin the game. Getting the best effort out of all your players every time they take the court can be a real challenge at times, but remember that you're fully capable of handling it. Just keep in mind that your motivational pregame talk needs to pull the players together to work as a team and to want to help one another.

The following tips help ensure that your pregame words hit home and produce the effect you're shooting for.

A volleyball coach needs to keep an energetic level of play going all game long, even on those days when your team's blocking is falling apart, its passing is erratic, and its offense isn't producing points. Being a constant source of motivation for the players helps keep them focused and involved in every aspect of the game, which helps keep them performing at higher levels.

Keep the following do's and don'ts in mind when trying to motivate your players throughout the game.

What you say to your team following a game and how you say it has a big impact on the kids because that message resonates in their heads until the next time they step onto the court. Regardless of whether your team won or lost, played great or turned in one of their worst performances, one of your most important responsibilities as their coach is sending the players home feeling good about themselves in some way.

When meeting with your team after the game, remember the following points:

The National Alliance for Youth Sports is America's leading advocate for positive and safe sports for children. It provides a wide range of programs for coaches, administrators, officials, parents, and young athletes. Greg Bach is the Director of Communications for the Alliance.