By: Florence Griffith Joyner and John Hanc and Jackie Joyner-Kersee and
Updated: 03-26-2016
From The Book: Running For Dummies 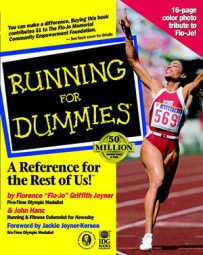 Most running safety rules are just common sense. But you see so many runners — both male and female — who violate them every day that a rules review is indeed in order.

"But I love to listen to my music!" is a common rejoinder from those who refuse to give up their headsets. Fine. Wear them when you're running on a treadmill. But when you're outside, especially when you're on the roads, you are simply asking for trouble if you tune out your surroundings.

If you need distractions, tune into the sound of the environment around you instead. Or listen to your music at home while you warm up, and play it back internally as you run. Or enjoy the conversation of other runners.

So the best way to prevent an untimely meeting with one of these vehicles is to be able to see them. That means running on the side of the road or on the sidewalk and running while facing traffic.

If you must run alone, a treadmill at home or at a health club is a much safer option. A local track also offers some protection, but not if you're running alone and after dark.

Florence Griffith Joyner, the "World's Fastest Woman," won three gold and one silver medal in track and field at the '88 summer Olympic Games in Seoul, South Korea, in addition to a silver medal at the '84 Games in Los Angeles. In 1989, she was voted "Most Outstanding Amateur Athlete in America" and was inducted into the USA Track and Field Hall of Fame in 1995.
John Hanc is a running and fitness columnist for Newday and contributes frequently to Runner's World magazine. He is the author of The Essential Runner and The Essential Marathoner.