How to Establish Your Golf Swing Plane

The swing plane, at its most basic, is the path your golf club’s shaft follows when you swing. Swing plane can get complicated — especially if you want to cover all the possible variations in the plane from address to the end of the follow-through.

The plane of your swing is dictated to a large extent by the shaft’s angle at address. The swing you make with a wedge in your hands is naturally more upright — or should be — than the swing you make with a driver. The driver has a longer shaft than the wedge and a flatter lie (the angle at which the shaft emerges from the clubhead), so you have to stand farther away from the ball.

The easiest way to keep your swing on plane is to have a series of checkpoints. The following checkpoints assume that you’re swinging a driver and that you’re right-handed:

To analyze your swing, use a video, a series of still photos, or a mirror — or have someone watch you.

If your wrist angle changes, it’s either bowed or cupped (see Figure 7-3). A bowed (bent-forward) left wrist at the top makes the clubface “look” skyward in what is called a closed position. From that position, a hook is likely. A cupped (bent-backward) wrist makes the clubface more visible to someone looking you in the face. A cupped wrist leads to an open position, which probably results in a slice. 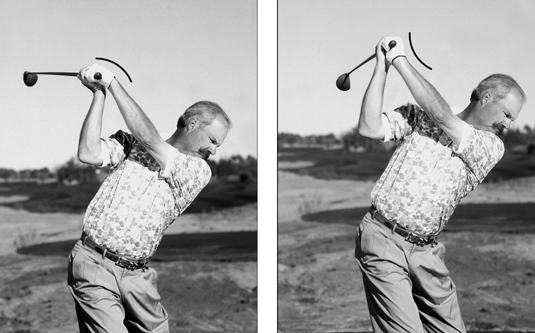 Gary McCord is a PGA Champions Tour player and celebrity golf instructor. He’s best known for the knowledgeable perspective, refreshing humor, and irreverent wit he has shown as a golf commentator for CBS for over 25 years. McCord also appeared in the Kevin Costner movie Tin Cup, playing himself.