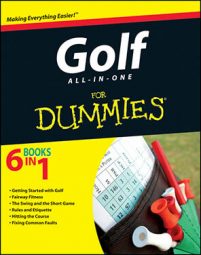 Explore Book Buy On Amazon
The best way to improve your golf game is to practice. Two common obstacles to practicing golf are finding the time to take some golf swings and overcoming the boredom of repetition. Never fear. A few simple strategies can help you carve out a few minutes each day to work on your golf game and make practice more interesting.

A sample practice schedule for golfers

A practice schedule can help motivate golfers to adhere to practice—and thereby improve their golf games. Golf practice is important because the sport requires skills that don’t come naturally to most people. Here’s a sample practice schedule to guide you in crafting one that fits into your own busy life:

Warming up before hitting the golf course

A warm-up up at the golf course isn’t the same as a golf practice session. Warming up includes stretching, getting a feel for the golf club, making ball contact, and building confidence; it takes place 30 to 40 minutes before you hit the first tee. Here’s a sample warm-up plan.

A trio of golf games to practice putting

Putting practice certainly sharpens a golfer’s skills, but all that practice can become boring. Incorporate skill games into putting practice to keep it fresh. Golfers can fine-tune their skills alone or with another player during these practice drills, which are disguised as challenge games:

Saddle up for a game of Horse by following these steps to practice putting:

Snake sharpens your putting by forcing you to pay closer attention to your first putt. Follow these steps, and the game of Snake is on:

Eight in a Row

Eight in a Row is a fantastic putting game that you can play all by yourself. Take these steps toward putting success: