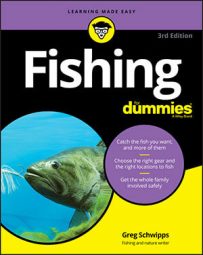 Explore Book Buy On Amazon
Odds are, more people's “first fish” are caught from the sunfish family than from any other group of freshwater fish. Consisting of 30 species, the sunfish family includes the widespread and feisty bluegill, the sporty crappie, and the highly prized largemouth and smallmouth bass. These are the most popular species from this family, and they appear throughout North America. They likely wait near your house to offer you great sport and table fare.

Sometimes known as bream in southern locales, bluegills range in color from dark green to yellow to almost white. (The habitat they reside in can influence their color — in clear water, such as that found in a quarry; they tend to be lighter, for example.) These hand-sized fish love ponds and lakes, and appear in running water, as well. They eat a variety of insects and crustaceans, and bite willingly on a variety of baits. Bluegills rarely exceed 15 inches in length, and they are often much smaller. They seek quiet, weedy water where they can feed and hide. They like shade during the hottest parts of the day and usually remain near some kind of cover (like docks) because they are common prey for fish such as largemouth bass. Bluegills adapt well to a variety of habitats, and are often stocked in retention ponds and community lakes. Bluegills fit easily in the hand, but take care with the dorsal fin, which consists of spines that can deliver a painful stab. Bluegills fight fiercely with every ounce when hooked, similar to a lightweight boxer bouncing around the ring. You can see a bluegill in the color section.

Crappies: A little bigger, and a bit sportier

Crappies fight well on light tackle and can taste great. They tend to school, so catching one is a good sign of things to come. Crappies might grow to nearly 20 inches and 5 pounds, but that would truly be a monster specimen. There are white crappies and black crappies, and although both are common, the white crappie is more widespread. Both species are popular with anglers all over North America because they bite eagerly on all kinds of bait and small lures. Minnows work well for crappies because adults usually feed on small fish, although they won’t pass up insects and crustaceans. Crappies do well in a variety of waters and prefer the silted, slow-moving water found in ponds and reservoirs throughout the country.

If you catch a crappie, you can quickly tell which kind you have by looking at its dorsal fin. Check out the figure and consider the following: 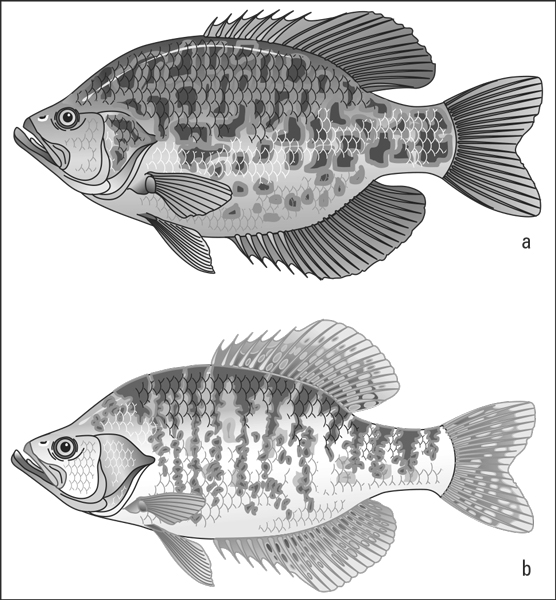 Notice the subtle differences between the black (a) and white (b) crappies.

Largemouth bass: The most important gamefish in America

Largemouth bass appear all over the country, and are pursued with feverish intensity. Bass tournaments are high-dollar affairs, with professional anglers chasing down fish from gleaming boats bristling with arsenals of gear. Many lakes, rivers, streams, and brackish coastal waters have populations of largemouth, and anglers don’t need fancy equipment to get in on the excitement of catching this hard-fighting sportfish. Largemouth bass take lures, plugs, flies, plastic worms, real worms, crayfish, and crickets. In short, they are opportunistic feeders that often strike aggressively. As shown in the color section, the jaw of the largemouth extends farther back than the eye (which is not true of the smallmouth). The largemouth is usually dark green in color with a dark band along the lateral line. The dorsal fin is divided into two distinct portions: hard spines in front and softer ones in the rear. The largemouth is sometimes known as the bucketmouth because of its large mouth, which appears even bigger when it attacks your lure, fly, or bait. Bass grow larger in warmer climates like those found in Florida or California, where 20-pound largemouths appear; in the Midwest, an 8-pound bass is a rare trophy.

In what’s perhaps the most-quoted phrase in angling literature, retired Civil War surgeon James Alexander Henshall called black bass (meaning largemouth, smallmouth and spotted bass), “Inch for inch and pound for pound, the gamest fish that swims.” Many people now mistakenly believe he was referring to only the smallmouth bass, because the description is so apt.

The mouth of the smallmouth isn’t that small, but its upper jaw is shorter than the largemouth’s.

How to pick up a bass: If you try to pick up a bass by grabbing its body, you’ll find it’s about as easy as trying to diaper an angry baby. Even worse than babies, bass have spiny fins that can deliver nasty pricks. With a bass (and with many other soft-mouthed fish), however, you can nearly immobilize it if you grab it by the lower lip, depressing its lip between thumb and forefinger as shown in the adjacent figure. Be very careful to avoid the hook that caught the fish, especially the multiple treble hooks of some lures. Larger fish (of every species) should be held horizontally and supported under the belly. This prevents damaging the fish’s organs. 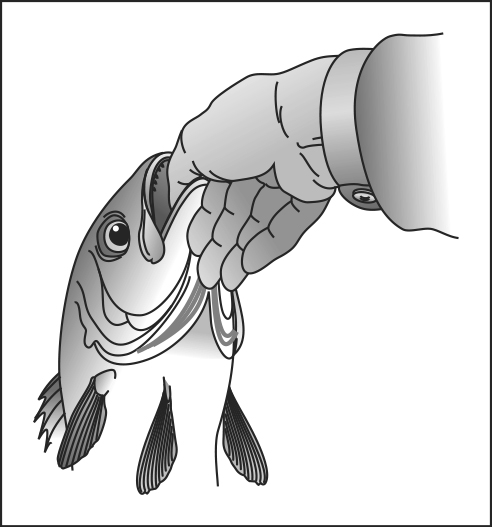