Types of Defensive Coverage in Football

American football teams’ defenses employ two types of pass coverage: man-to-man and zone coverage. Both coverages have many variations and combinations, but the core of every defense’s coverage begins with either the man-to-man concept or a zone concept.

Simply stated, man-to-man coverage is when any defensive back, or maybe even a linebacker, is assigned to cover a specific offensive player, such as a running back, tight end, or wide receiver. The defender must cover (stay with) this player all over the field until the play ends. His responsibility is to make sure the receiver doesn’t catch a pass. The most important rule of man-to-man coverage (which is also known as man coverage) is that the defensive back must keep his eyes on the player that he’s guarding or is responsible for watching.

Here are the three main types of man-to-man coverage:

In zone coverage, the defensive backs and linebackers drop into areas on the field and protect those zones against any receivers who enter them. The biggest difference between zone coverage and man-to-man coverage is that in the latter coverage, a defender is concerned only about the player he’s covering. In virtually all zone coverages, two defensive backs play deep (12 to 15 yards off the line of scrimmage) and align near the hash marks.

Here are the main features of zone coverage:

The simplest way to recognize a zone defense is to observe how many defenders line up deep in the secondary. If two or more defensive players are aligned deep (12 to 15 yards off the line of scrimmage), the defense is in a zone.

Eight men in the box

Eight men in the box refers to a setup that enables a team to defend the run more effectively when it has a strong secondary. The box is the imaginary area near the line of scrimmage where the defensive linemen and linebackers line up prior to the offense putting the ball into play. Usually, a team puts seven defenders, known as the front seven, in that box. But a team can put an eighth man — the strong safety (SS) — in the box if it has two outstanding cornerbacks (CB) who can cover wide receivers (WR) man to man. 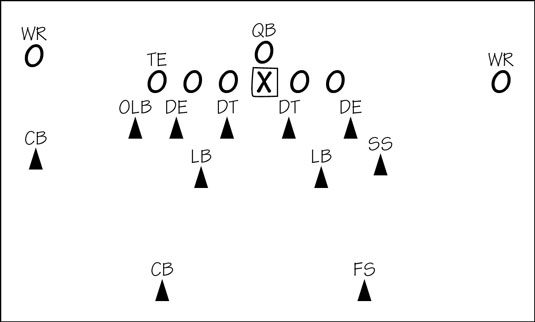 The Nickel 40 defense is strictly a pass defense that can employ either a linebacker or another defensive back as the sixth player in pass coverage. The sixth, or dime back (DB), position can end up being a defensive back, as well as a linebacker at times. In this alignment, the linebacker aligns in the middle about 5 yards away from the line of scrimmage. 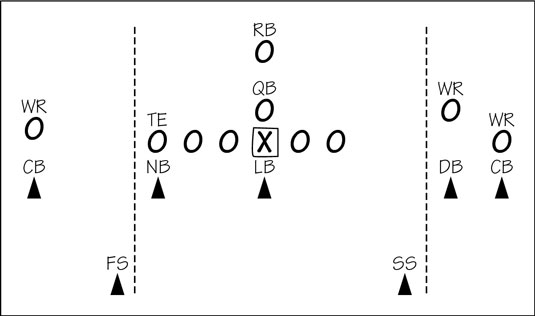 The object of the Nickel 40 is to pressure the quarterback, hoping to either sack or harass him. Teams use their four best pass-rushers on the field in this alignment, and these four players will most likely be opposed by only five offensive linemen. Defenses use a Nickel 40 defense only when the offense uses three or more receivers in its alignment.