The Start of a Football Game: The Kickoff

For American football fans, the opening kickoff is an exhilarating start to any game. They see the two-sided thrill of one team attempting to block the other, helping its returner run through, over, and past 11 fast-charging players of the kicking team. (Well, make that ten players. The kicker usually stands around the 50-yard line, hoping he doesn’t have to make a tackle.) And the kicking team wants to make a statement by stopping the returner inside his own 20-yard line. This is the object on every level of football, from peewee to college to the NFL.

Deciding whether to kick or to receive

At the coin toss, when captains from both teams meet the referee in the center of the field, the captain who correctly calls the flip of the referee’s coin decides whether his team is to receive or to defend a particular goal. Most teams elect to receive the kickoff because they want the ball for their offense.

On some occasions, a team may allow its opponent to receive after winning the coin toss, meaning it defers its right to kick off:

Setting up for the kickoff

For kickoffs, NFL and college kickers are allowed to use a 1-inch tee to support the ball. High school kickers may use a 2-inch tee. The kicker can angle the ball in any way that he prefers while using the tee, but most kickers prefer to have the ball sit in the tee at a 75-degree angle rather than have it perpendicular to the ground.

During some games, strong winds prevent the ball from remaining in the tee. In those instances, a teammate holds the ball steady for the kicker by placing his index finger on top of the ball and applying the necessary downward pressure to keep it steady.

Here’s how the kickoff team lines up:

As the kicker strides forward to kick the ball, the ten players move forward in unison, hoping to be in full stride when the kicker makes contact with the ball.

After special teams get set up and ready to play, it’s time to actually kick the ball:

The ideal kickoff travels about 70 yards and hangs in the air for over 4.5 seconds. Maximizing hang time (the length of time the football is in the air) is important because it enables players on the kicking team to run down the field and cover the kick, thus tackling the return man closer to his own end zone.

The kicking team’s objective in a kickoff is to place the ball as close to its opponent’s end zone as possible for a number of reasons:

To keep the kick returner from making many return yards, kickers may attempt to kick the ball to a specific side of the field (known as directional kicking) to force the return man to field the kick. In this situation, the returner is often restricted, and the defense can pin him against the sidelines and force him out of bounds.

The kickoff formation shown in this figure typifies directional kicking. Instead of simply kicking the ball straight down the middle of the field, the kicker angles the ball to the left side. 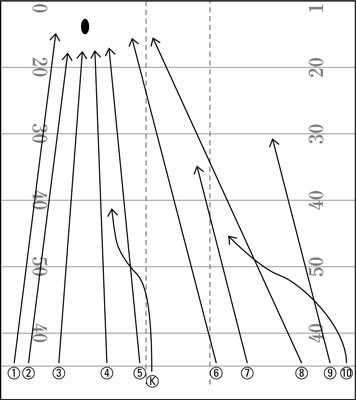 This style is ideal against a team that lines up with only one kick returner. The directional kick forces the returner to move laterally and take his eyes off the ball. The kicking team’s purpose is to focus its coverage to one side of the field, where it hopes to have more tacklers than the return team has blockers.