The Quarterback's Stance, Drop Back, and Hand Off

In a football game, a quarterback begins each offensive play with his stance behind the center and his hands under the center. The center snaps the football back to the quarterback, as shown in this figure. 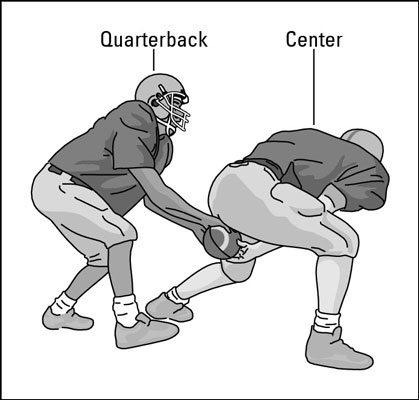 The quarterback’s stance under center starts with both feet about shoulder width apart:

Dropping back is what a quarterback does after he receives the ball from the center. Before he passes the ball, he must move away from the line of scrimmage (and the opposing defense) and put himself in a position to be able to throw the football.

You see quarterbacks backing up from center, or backpedaling, when the offensive formation is aligned to the left of a right-handed quarterback. Backpedaling is essential in those alignments so that the quarterback can see whether the linebacker on that side is blitzing (rushing across the line of scrimmage in an attempt to tackle the quarterback). The quarterback must be alert to a possible blitz; consequently, he can’t afford to half-turn his back to that side.

The depth to which a quarterback drops in the pocket generally is determined by how far from the line of scrimmage the receiver is running:

One of the most important things for a quarterback to learn is the running game and how it affects his steps from center. Some running plays call for the quarterback to open his right hip (if he’s right-handed) and step straight back. This technique is called the six o’clock step. The best way to imagine these steps is to picture a clock.