How a Team Returns the Kickoff in a Football Game

The ultimate purpose of a kickoff return in football is to score or advance the ball as close to midfield (or beyond it) as possible. A football team’s ability to start out on offense in better-than-average field position greatly increases its chances for success.

Setting up a blocking wedge

Good return teams set up a blocking wedge with two or three huge players aligned together (the NFL prohibited teams from using more than three players in 2009):

The wedge’s objective is to assist the return man in breaking free from the initial pursuit by creating a hole or lane in which the returner can run freely. Coaches want these blockers to remain on their feet and work together to free their man. 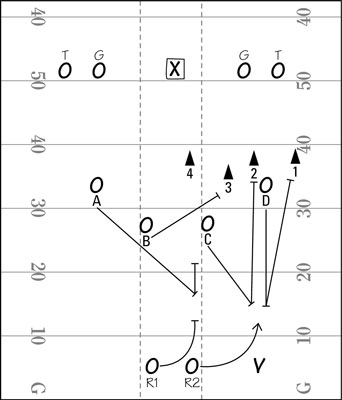 Here’s the setup for this strategy:

After the ball is kicked, the players take the following actions:

Coverage men (the guys whose job it is to tackle the kick returner) must be aggressive, fast, and reckless in their pursuit. They must avoid the blocks of the return team. Special teams coaches believe that a solid tackle on the opening kickoff can set the tone for a game, especially if the return man is stopped inside his own 20-yard line.

The job of the kickoff coverage man isn’t an easy one. Players get knocked down once, twice, and sometimes three times during their pursuit of the kickoff returner. Not for nothing is the coverage team sometimes called the “suicide squad.”