Football Special Teams: How to Block Field Goals and PATs

Blocking either a PAT or a field goal attempt in a football game can change the momentum of that game and eventually decide its outcome. To block kicks, defensive players must be dedicated, athletic, and willing to physically sacrifice themselves for the good of the team. To have a successful block, each man must do his job.

With the ball 7 yards off the line of scrimmage, teams place their best pass-rushers in the middle, believing that one of them can penetrate the blocking line a couple of yards and then raise his arms, hoping to tip the booted ball with his hands. If the kicker doesn’t get the proper trajectory, the kick can be blocked.

In the following figure, the three interior defensive linemen (LT, N, and RT) are over the two guards and the snapper: 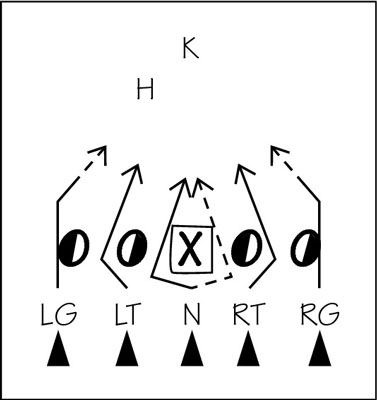 These linemen want to be able to gain an edge, an angle, on those blockers. Their attempts to block the kick won’t work if the two tackles align squarely on top of the guards. They must pick a particular shoulder of the guard and attack to that side.

The guards’ role in the play is crucial:

The only chance that the middle block has of succeeding is if the pass-rush moves that the three interior defensive linemen make on the offensive linemen work. It’s critical that all three players are isolated on one blocker. The defenders can decide to double-team a blocker, hoping one of them breaks free and penetrates the line.

On other kick-block plays, teams attempt to break through from the outside, using two men on one blocker and hoping the single blocker makes the wrong choice and allows the inside rusher to get free.