Difficult Situations an Offensive Line May Face in Football

An American football coach — or a quarterback, for that matter — sometimes needs to lead his football team’s offense out of the sticky situations that arise. Offenses use these strategies to gain the necessary yardage for a first down, move downfield with little time left on the clock, and more.

Deciding whether to gamble on fourth-and-1

The game is tied, and on fourth-and-1 you have a decision to make: Should your team kick a field goal or go for the first down and maintain possession, hoping to end your offensive possession with a touchdown?

For most coaches, the decision depends on the time of the game and the team they’re playing. If a team is on the road against a solid opponent, one that has beaten the team consistently in the past, most coaches elect to kick a field goal. The thought process is that any lead, even a small one, is better than risking none at all against such a team when you’re on the road.

The toughest area in which to make a decision is between your opponent’s 35- and 40-yard lines — a distance that may be too far for your field goal kicker but too close to punt. If your punter kicks the ball into the end zone, for example, your opponent begins possession on the 20-yard line, giving you a mere 15-yard gain in field position. When you’re making the decision whether to kick or punt in this 35- to 40-yard line area, you may as well toss a coin.

Making a first down on a fourth-down gamble

It’s fourth down and 1 yard to go for a first down, and your offense just crossed midfield. You want to gamble, believing that your offense can gain enough yards for a first down. The best play to call in this situation is a run off the tackle and the tight end on the left side of the formation, as shown in this figure. 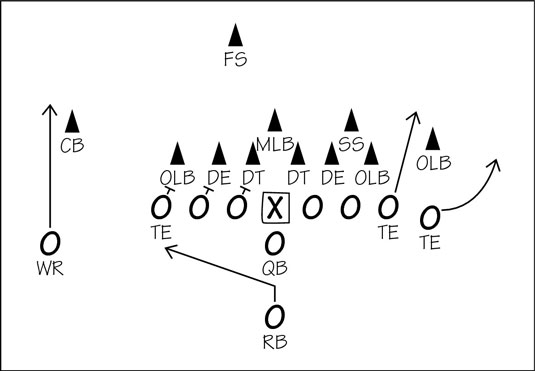 The quarterback sneak is one of the oldest plays in the book. But it isn’t that simple to execute, and it doesn’t always succeed. The play is designed for the quarterback to run behind one of his guards, using the guard as his principal blocker. Teams run the quarterback sneak when they need less than a full yard, sometimes only a few inches, for a first down.

To be successful with the sneak, the quarterback delays for a moment and determines the angle the defensive linemen are coming from. Then he dives headfirst, pushing his shoulders into the crack behind whichever guard (the right or left side) is called in the huddle.

Your team has two minutes left in the game to drive 70 yards for a score. You must score a touchdown (and successfully kick the extra point) to tie the game. As an offensive coach, you’re hoping the defense decides to play a prevent defense, which means they use seven players in pass coverage while rushing only four linemen or linebackers at the quarterback. When a defense plays a prevent defense, you may want to run the ball because the running back has plenty of room to run after he crosses the line of scrimmage.

The best pass play to use in this situation is the triple stretch, which is also known as the vertical stretch. In this play, one receiver runs a deep pattern through the secondary, another receiver runs a route in the middle, and another simply runs underneath, as shown in this figure. 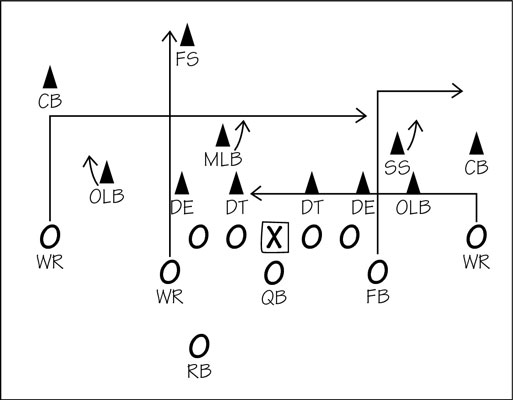